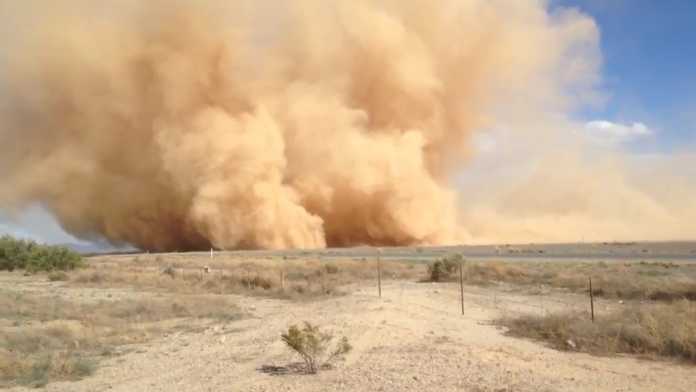 A dust storm swept across North India, primarily through Rajasthan and Uttar Pradesh, killing 125 people so far, and injuring hundreds. The storm that wreaked havoc pulled down houses and uprooted trees as it attacked the states with vengeance.

Rajasthan being majorly a desert consists of areas that experience extremely high temperatures. Moistures levels were also high in the atmosphere, and the heat caused the vapour to rise above and form into clouds. The wind coming in from eastern parts of India carried the moisture which further helped in formation of clouds. The water vapour which is present in the heavier air, which is at the bottom, gets heated up, and as it gets less dense, it displaces the air above it and rises above. Here, due to the drop in temperature, the vapour condenses and forms clouds.

The difference in air pressure across North India caused the movement of winds, which flew in at high speeds, picking up sand and sweeping across Rajasthan.

Expert meteorologists from National Geographic say the winds were a downburst. “As the name implies, a downburst is characterized by intense, downward air movements during thunderstorms. They can produce some of the strongest wind gusts of all weather patterns. As the downward air hits the ground, it moves outward and back up.”

The force and speed of the winds were at such a large magnitude that they were capable of knocking over tall structures and buildings. The thunderstorms were caused by the vapour carrying winds, which formed clouds.

Agra, home to the Taj Mahal, was the worst-hit area. Villages in Rajasthan too suffered similar fates. Homes which tumbled down due to being struck by lightning or the wind killed many who were sleeping. Power poles were knocked out and lines were damaged, which potentially cut their power source.

Most of the injured suffered due to the falling down of buildings and uprooting of trees. It is predicted that the winds will get stronger and another storm is expected to hit. The disaster management teams have been on their feet, as have the hospitals and doctors. The government has announced Rs. 4,00,000 as compensation for the families of the deceased.