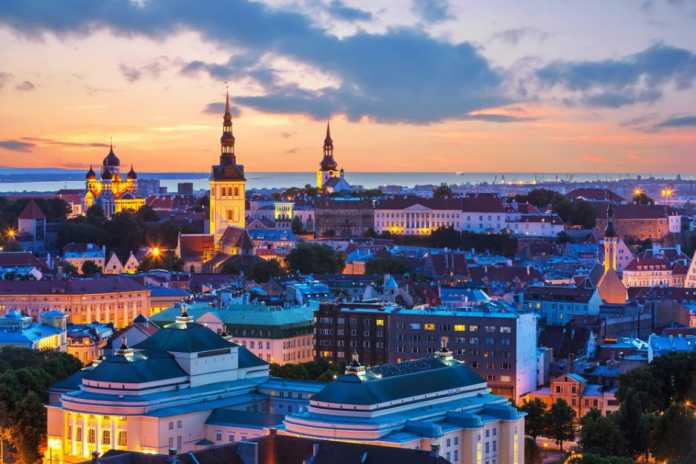 At first, I had to look up Estonia on the map. I was a little intrigued as it had been part of the Soviet Union at one time. I was even more surprised to notice its proximity to Finland, Sweden, Latvia and Georgia. It really is uniquely located and easy to get to. A port town, Tallin is a frequent stop for mega cruise ships en route to St Petersburg. While for many its a pit stop, I fell in love with it for its simplicity and was completely taken in by the magic of the old town and its castles. I easily spent a few days exploring the city.

One of the safest cities in the world, Tallin is quiet even at peak hours. Estonia has a population of 1.3 million and the population is spread out into the country as 70% of Estonia is Forest. It’s also incredibly cold with Nordic icy winds chilling your bones even in springtime but as Estonians would say – There’s no such thing as bad weather.There’s only inappropriate dressing! However, in the summertime, the town is overflowing with over a million tourists that come in from Germany, Ukraine, Russia, Italy and all over Europe. The main attraction is the old town of Tallin which is steeped in fascinating medieval castles and museums. Our guide took us through several pretty by lanes, with walls painted pink and yellow, and pieces of history at the old houses along the way. The thing to do is have a glass of the local liqueur ‘Gould’ from a roadside cart along the way to keep you warm (well I had three as it just tasted so good!). See the beautiful churches, some Russian and some Estonian, and feel the contrast. The Russian church was more beautiful than anything I have ever seen before, very ornate, a lot of gold, and amazing craftsmanship. Your tour will leave you back in the old town where there are tons of cafes and bars to choose from, including an Indian restaurant. There’s Old Hansa where the staff is dressed in medieval outfits and spooky to say the least (not the best for children!) There are some courtyard bars which leave fur and thick woolen blankets on the chairs outside so you can snuggle up and drink some mulled wine. The Estonias have a lot of fresh produce so you’ll see blue wine and berry flavoured honey and lots of homemade chocolate. Of course, if you eat meat, a lot of fresh fish, oxtail, and various other meat.

If you get a chance to explore the rest of the city a bit, you’ll find a multicultural society. Huge offices in Tallin of e-commerce giants like Transferwise, Pipedrive, Skype, most of them have a work culture where they place value on respecting each other. There are suites dedicated to different parts of the world so that there is a sense of familiarity as people come from all over the world to work. Being a digital society (all government services are online and you can even get an e-residency online to start a business in Estonia) it has also pioneered the digital nomad culture with a visa that allows you to work from anywhere in the world for up to a year. And a lot of people see it as a gateway to the rest of Europe. Estonians party hard. They don’t go out dancing before one in the morning, they don’t finish before dawn and they love having a champagne breakfast to cap the night out. You’ll also see several stag groups from England or elsewhere enjoying their weekend in the old town. Go bar hopping, or enjoy some sheesha before hitting the clubs. In the magic of the old town, anything is possible!