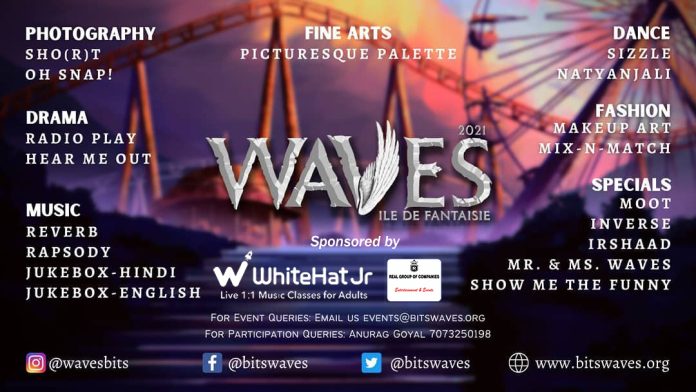 Waves, BITS Pilani Goa’s annual cultural festival, is a floating ocean of talent, art, skill, originality, brilliant lights, booming songs, and endless fun. Waves has been a massive success in past years and is ranked among India’s top 10 cultural fests, with over 60,000 plus visitors and a turnover of INR 90 lakhs, with over 180 universities participating throughout India. It attracts students from throughout the nation. Various fantastic competitions can be witnessed throughout Waves. Heated debates, passionate poetry slams, and various other informal gatherings and a wide range of events.

Dance among the butterflies, listen to the birds chirping or take a joyous ride on the unicorn, to the magical kingdom amidst the clouds. Injecting with enthusiasm and letting higher spirits go even higher as we ride on top of the Ferris wheel. Unmask the suspense, chasing us in the carnival. An affair of thrill and excitement awaits.

In recent years, Waves has hosted performances by celebrities such as Farhan Akhtar, Amit Trivedi, Neeti Mohan, Vishal–Shekhar, Priyanka Chopra, Kalki Koechlin, Kailash Kher, Karsh Kale, and musical artists such as Nucleya, Ritviz, Quintino, Marnik, and Lost Stories. Well-known comedy troupes such as All India Bakchod, TVF, Being Indian, and others have performed at Waves.

Sunburn and the Femina Miss India eliminations were also held at WAVES BITS Pilani Goa. It has grown into one of India’s most prestigious collegiate cultural festivals. The origins of the event can be traced back to a 2005 intra-college festival.

Waves’ celebrity and glitz drew contestants from all around India each year. In addition, the festival’s attendance and quantity of events rose at an exponential rate. Waves 2014 featured an international act, The WorldFest, a Coke Studio performance for the Indie Nite, and the Searock event, which has grown into one of India’s largest semi-professional rock band hunt competitions. Waves 2016– “Tides of Time” was the subject for BITS Pilani, Goa’s 10-year anniversary of Waves.