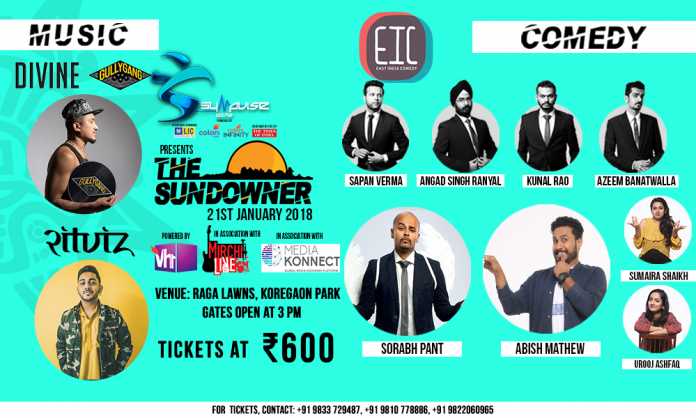 This time Sympulse, Pune’s biggest college fest brings to you “The Sundowner”.

The finale event of the five – day extravaganza has an exceptional lineup of not only talented musical artists but also stand-up comedians to entertain and engage the crowd in conjunction with the beats of music and electrifying vibes. With an array of 20+ mouthwatering food stalls and a flea market, this event on the 21st of January at Raga Lawns in Koregaon Park is sure to blow you away.

This year will see artists like you can look forward East India Company, the country’s best humour writers, script writers, comedians, tweeters and occasional email deleters. Together, the group is known for their sketches (especially the ‘Then vs Now’ series), the EIC Outrage topical news series, and the annual Ghanta Awards (a celebration of the worst of Bollywood), and individually, they’ve done thousands of stand-up shows. At the Sundowner, we have the EIC live cast – Sapan Verma, Angad Singh Ranyal, Azeem Banatwalla and Kunal Rao. Also in attendance are – He sings, he dances, and when neither are enough, he tells jokes. One of the most recognized faces of Indian comedy, Abish Mathew was one of the first Indian Youtube stars, who has over 30 million views on his channel. These videos include sketches, stand-up, and of course, his hit talk-show, Son of Abish, which has featured stars like AIB, Vishal Dadlani, Kanan Gill, Badshah, Taapsee Pannu, Cyrus Broacha, and Vir Das. Sorabh Pant is one of India’s best and most travelled comedians with shows across 15 countries, best known for his incredible energy and overt expressiveness! Pune-based DJ Ritviz is a singer and dance music producer. Appreciation for his music has come from top Indian bass music producers including Nucleya, Su Real and SickFlip. His music is bass heavy, and rich in eastern sounds. He has catapulted to fame with recent cult favourite “Udd Gaye,” and is sure to keep the audience entertained. Born and brought up in the gullies of Mumbai, Vivian Fernandes a.k.a DIVINE has come to be known as ‘the Voice of the Streets’. His 2015 smash hit “Mere Gully Mein” was not only honoured as the Best Video of 2015 by Rolling Stone India, it also established him as one of the premier hip-hop acts in India and garnered him an international listenership.

He was titled Best New Artist 2015 by iTunes and Apple Music in India and as one of the top Artists To Watch-Out For In 2016 by the BBC Asian Network. His collaboration with Nucleya for the song “Scene Kya Hain” was an instant hit and he’s sure to get the crowd grooving to his beats. Sumaira Shaikh is a writer for comedy collective AIB and a stand-up comedian. Sometimes scary, sometimes funny but always making sense, Sumaira’s stand-is memorable and delivered in a stone-faced manner. She has also acted in some of AIB’s sketches, on YouTube. Urooj Ashfaq is a writer, comedian and metal music fan who found her spirit animal in Betty from Archies, her stand-up routines cover everything from burqas to cannibalism, some serious subject matter coupled with her rather fun delivery. Currently a part of TLC’s brand new series called Queens of Comedy, she is making a name for herself on the comedy scene.