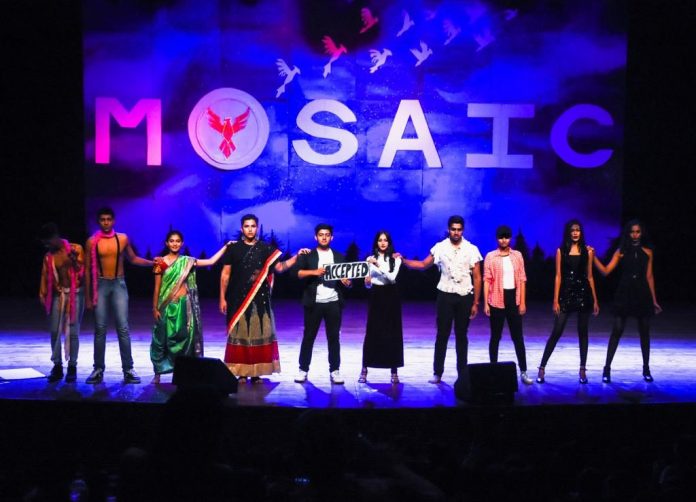 Mosaic, by definition, is an intricate pattern produced by arranging together small pieces. The St. Andrew’s intercollegiate festival ‘Mosaic’, lives up to the definition and the true essence of the word. St. Andrew’s College has been known to conduct an array of vibrant cultural and academic festivals. These come together to form this giant and extravagant event, representing the smaller pieces that form the bigger picture.

Mosaic 2019 is everything that was good about its predecessor and more. The four-day event extending from the 16th of September 2019 to the 19th of September 2019 will officially be launched with Tones box at Dublin Square in Phoenix Marketcity (Kurla), from 12 pm onwards featuring headliners like Naezy, Siddharth Slathia and Zaeden. The students of St. Andrews’s College will also be putting up a dynamic performance choreographed by Mr.Nimit Kotian. This year, Mosaic aims to reach higher than before with double the events and double the fun.

Mosaic 2018, a project that had been the brainchild of a dedicated team of students, debuted last year with its theme being ‘The Take Off’. The three-day cultural extravaganza saw thousands of students from all over Mumbai thronging to the campus to showcase their talent. During the event, the slogan ‘Udna Banta Hain’ became wildly popular amongst the students. Instagram, Facebook and other social networking sites were filled with pictures of students all over campus with this hashtag. Crowds could be heard chanting the slogan with enthusiasm throughout the event and it became a common practice among everyone. Mosaic brought back a feeling of warmth and a sense of fellowship and unity amongst the Andreans that had been seen over the years.

Mosaic, amongst many things, is an accurate representation of teamwork. Teamwork then turned to friendship and Mosaic turned into family. Now, after the exponential success of Mosaic 2018, Mosaic 2019 is here and is ready for its next adventurous journey.

Mosaic 2019 promises to be bigger and better and as the reputation goes, St. Andrew’s College is never one to disappoint.