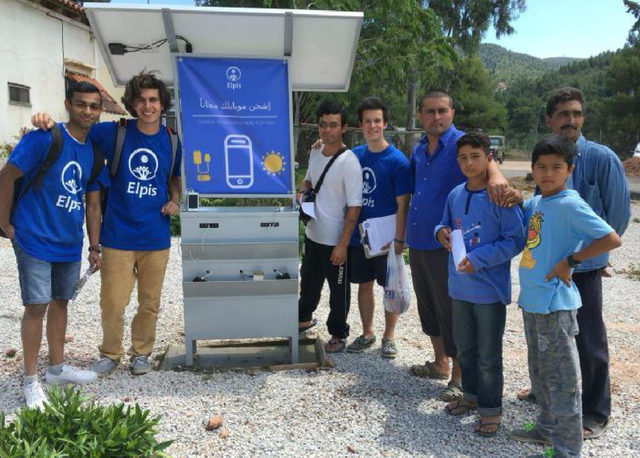 Imagine you were in a refugee camp in Greece or an immigrant. Wouldn’t a cell phone be your only hope in such dire times? For all you know, it could be your only helpline. Migrants stuck in these refugee camps have a cell phone as their only hope to get in touch with the people they need to. They’re a saviour for people at places such as Greece, which are bursting at the seams with refugees. But what if you are low on battery?

Charging your phone isn’t an easy task in a place like camps, which are overcrowded and refugees, both young and old are fighting over an outlet to call their loved ones to let them know that they’re safe.

A team of young enthusiastic students from Edinburgh University have found a solution to this problem. They have designed a charger unit called Project Elpis, that works on solar power. Greece has plenty of such outlets, making use of the ample sunlight which makes it easier to generate electricity.

These students have installed two of these solar charging units at each camp with 12 outlets that provide electricity for an hour. These solar chargers have given hope to refugees in camps. They provide free power to about 240 people per unit each day.

The master mind behind this is 20-year-old Alexandros Angelopoulos, who got the idea from his last summer visit to Europe, where people were escaping wars and poverty from the Middle East and around other troubled areas.

Once they started off with these projects, they faced a lot of challenges because of the bureaucratic approach in Greece. However, this wasn’t the first attempt to generate electricity at places from renewable resources. ‘Urine-Tricity’ was another project that was used to charge mobile phones and tablets.

“Mobile phones have given refugees hope, and there are hundreds of people who traveled by rubber boats literally clinging to these boats. After they reached their destination relived that they are free from terror and poverty. They snap selfies once they reach and log in to Google Maps to see their future destination. We wanted to bring positive attitude to these local communities”, said co-founder Samuel Kellerhals.