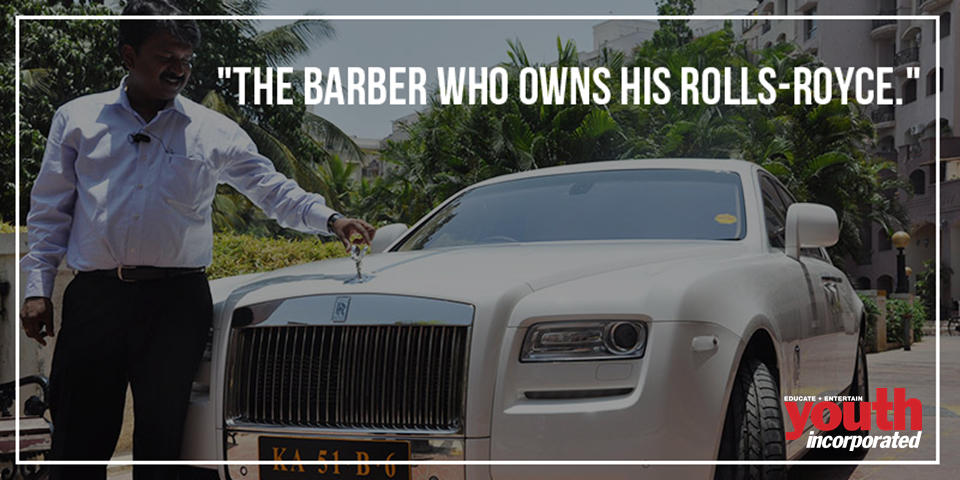 The story of the billionaire barber – Ramesh Babu

What do you need to be successful? Probably the four P’s of Success: Passion, Purpose, Perseverance, and Pain! If you have these four you’ll be successful, sooner or later. Everything else you get is optional. Your looks, your wallet, your talents, everything else is just a bonus.

Success doesn’t come to you because you asked for it. It doesn’t come with demand, rather with efforts. If you want to be successful, fill yourself with the 4 key elements: Passion, Purpose, Perseverance, and Pain. Success comes when you don’t stop. Perseverance is the key to removing all the impossibilities from the task. Pain gives you the energy to work harder. Purpose makes your goal clear. And the passion, of course, is the engine of your dream, without it no matter what you got – you just can’t go ahead.

This is the inspiring story of the barber hailing from Bangalore who owns a Rolls-Royce, and is not limited to the just shiny fleet of cars and wealth, but his success lies in his passion, rest everything is just to keep the score. If you want it, work for it. It’s that simple. This is the story of the billionaire barber – Ramesh Babu.

It started out as a story of misfortune when his father passed away in 1989.  He was just 7 years old at the time with two siblings. His grandfather had a salon, but Ramesh was too young to work. His mother wanted him to focus on his studies and rented out the shop for a measly sum of Rs.5 a day to his uncle. Ramesh somehow finished his pre-university education and later took a diploma in electronics. However, things had taken a turn for the worse in the meantime. His uncle bickered with his mother and refused to pay the rent. Ramesh could not be a mere spectator and insisted on taking over the barber shop in 1991. It is called Inner Space and is on Brigade Road, Bangalore. Soon it turned into a trendy hangout for youngsters.

A year can do a lot to the person and it was the same with Ramesh. When his uncle bought a car, Ramesh childishly took a loan to buy a Maruti Omni to compete with him. It was petty pride back in 1994. Since the car was lying about idle, a lady for whom his mother worked advised him to rent it out to people. Nandini akka, as he called her, taught him the basics of car rental business. That was the launching pad to the car-rental business from where he never looked back.

At present, Ramesh owns the Rolls Royce Silver Ghost, Mercedes C, E and S class, BMW 5, 6, and 7 series, imported Mercedes vans and Toyota minibuses (over 200 in number), he has 60 drivers working for him including the first driver he hired. He truly follows his passion and has no intention to do anything else otherwise. Every day he gets up at 6 am, works in his salon from 8 am to 10 am, then remains in his car rental office until 4 pm, coming back to his saloon to work until 7 pm, after which he again goes to the car rental office and remains there till 8:30 pm. He does more of what makes him happy. This is the example of how you should invest in yourself: business and brain.

Ramesh Babu from Bangalore is a glowing example of someone who has surged ahead with bold strokes in a market with cut-throat competition while still remembering his roots. As they say, “Let him sleep, for when he wakes, he will move mountains.” He did wake up at the right time, used his strategies and managed to earn enough and stay happy at the same time. Make a move. Be happy.