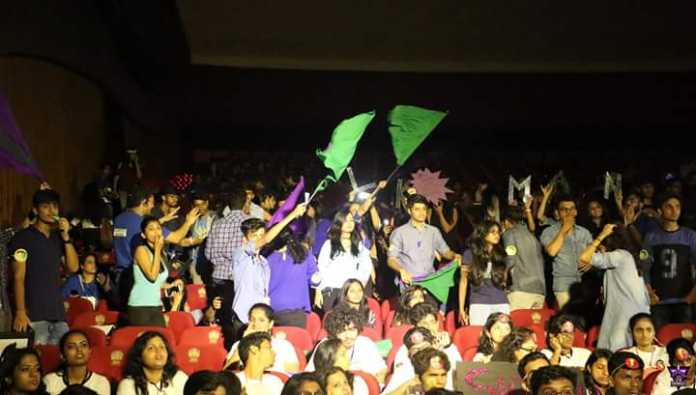 Mumbai: The powerful waves of this Media Festival have announced their arrival to the shore. Paparazzi – The Media festival of Mithibai’s Mass Media Department is about to spread its wings this year yet again. Team Paparazzi is overjoyed and keenly looking forward to 29th and 30th of November, their D-day. The annual festival has an intriguing theme titled The Oracle’s Box Office which will take its form on the days of the festival.

The Theme-Reveal took place for all participating colleges or contingents, as they are termed, wherein the theme was explained to all. Contingents in all glory of a Bollywood Character and with the support of their Hollywood troop combined will compete against other combinations of Bollywood and Hollywood in order to achieve a treasure on the Island. 17 unique events have been planned out for competing colleges. For over five months the Team Paparazzi has been working to make this festival a success.

“Paparazzi is meant to create challenges which persuade the students both, who are hosting and who are participating, to explore their capabilities and to channel their strengths in the direction of victory,” said Dr. Rajpal Shripat Hande, Principal of Mithibai college.

Team Paparazzi has been carrying out events prior to the festival. Since, the digital media plays a significant role in the current media scenario, Paparazzi has established their presence online on various social media sites like Facebook, Instagram, Twitter and YouTube. Paparazzi carried out Online PR Activities, wherein the participating colleges or contingents participate. The motive here was to interact with the participants and reach out to them. The contingents who finish first, second or third position in these PR activities are awarded PR points for their hard work.

Paparazzi, in the month of October, took up a social initiative titled as The Pink Whale Initiative. The aim of this initiative was to spread happiness and reduce the consequences of The Blue Whale Challenge. Under this initiative, Team Paparazzi organized and performed a Street Play titled ‘Chunauti’ at Carter Road in Bandra and at Juhu Beach. They also visited two Old Age Homes, Assissi Bhavan at Goregaon and St. Anthony’s Home For The Aged at Bandra, and celebrated an early Diwali with the residents. Paparazzi, under this initiative has introduced a series of positive tasks on the Internet titled The Pink Whale Challenge in order to curb solitude provoked by The Blue Whale Challenge.

Paparazzi is all set to roll out its Red Carpet as the Box Office will open its gates on 29th and 30th November.

About us: ‘Paparazzi’ is Mithibai College’s inter-collegiate Mass Media festival. Since its inception in 2013, it has become one of the most celebrated media festivals amongst colleges in Mumbai. With more than 30 colleges participating, the footfall keeps increasing each year. The festival will be held on the 29th and 30th of November, 2017.

For more information, please check out the links below: