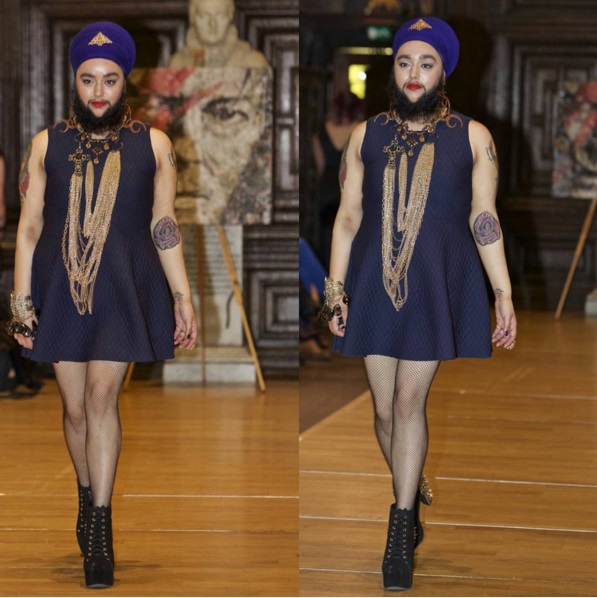 Harnaam Kaur, a 25-year-old from Slough, Berkshire, who is popularly called the ‘Bearded Dame’, became the first bearded woman to walk the ramp for a celebrity designer.

Recently, Kaur walked the ramp for American jewellery de signer Marianna Harutunian at the Royal Fashion Day in London. Becoming a model had been her most cherished childhood dream.

She wore a navy-blue skater dress with black combat boots, styled with blingy accessories, a matching turban and bold red lips. The confidence with which she entered the highly-stigmatised world of fashion and beauty was truly admirable. Her mere presence in a world which does not think she belongs in is nothing short of an absolute inspiration.

Kaur confidently sports a lush beard and moustache, and has caught everyone’s eye and taken the internet by storm.

She said that she’s grown up watching America’s next top model, and admiring Tyra Banks. She too, just like all little girls, always wanted to be like the pretty models. So she used to try copying the way they posed and walked. But as she grew up, she was constantly told that she was too fat, ugly, and disgusting to even model. She was told that she’d never walk the runway. All these negative comments even made her doubt her own worth. She used to look at models and tell herself that she will never ever be able to do what they are doing; that she’s not pretty enough or beautiful enough and doesn’t have the ‘right’ body type. She was laughed at when I said I wanted to model. Well, the joke is on her bullies now.