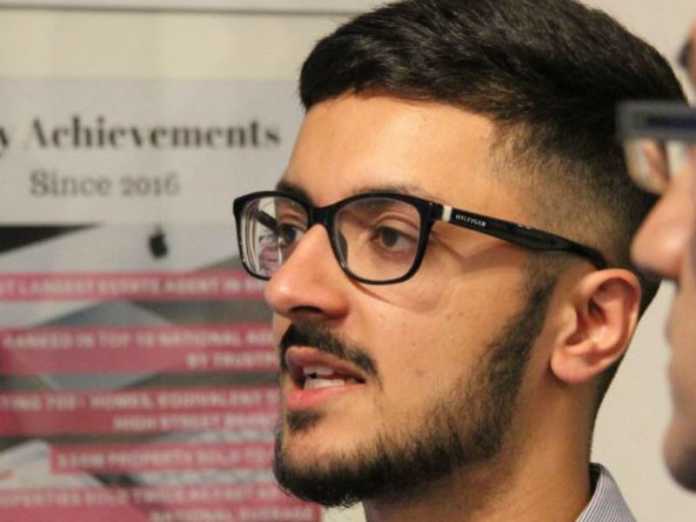 At the tender age of 19, Indian-origin Akshay Ruparelia has been crowned UK’s youngest millionaire. The teenager has made a fortune by selling houses during school lunch breaks and cracking huge real estate deals.

He hired a call centre service to answer his company switchboard while he was in class and rang clients back after the school bell rang. Within months his firm www.doorsteps.co.uk saw investors buying shares, and has been valued at £ 12 million. The company went on to become the 18th biggest estate agency in the UK, just 16 months after his website went live, and Ruparelia has sold £100 million worth of homes. The firm was started after his relatives loaned him £7,000, and already employs 12 people. It is set to double in size soon with investors having already handed him £500,000 to get their hands on shares.

The teenager is apparently on a mission to put traditional High Street estate agents out of business because they charge thousands of pounds in commission to sell a house, something he does for a mere 99 pounds. “I want to rip up the old-style way we sell homes in this country. People have had enough of being ripped off by High Street agents in flash suits and cars charging them a fortune, but actually doing not a lot to sell their home”, the 19-year-old told Mirror.

Akshay still managed five A Levels, three at A* and two A grades in Maths, economics, politics, history and financial studies at Queen Elizabeth High School in Barnet, London. He also has a place to study Economics at the University of Oxford, which he has put on hold. Akshay has 1,050 homes for sale on his website, and sells around 30 a week. The most expensive home sold in Notting Hill sold for £1.4 million.

Since both his parents are deaf, Akshay has to master sign language at a very young age. He even had to learn how to handle the family’s finances and daily expenses. He has a couple of tips for a successful business, the biggest being to employ mothers in his business. “If your mum gives you a bit of advice, take it. Mums know more than you’ll ever realise. That’s why I’m employing an army of them across the country”, he told Mirror.

His advice also includes reading lots of books, trusting your gut instinct, and relaxing a little. Akshay has already bought his parents a new car, and since he has passed his driving test, he will soon be treating himself to a shiny new Audi.

Hard work really does go a long way, no matter what age!