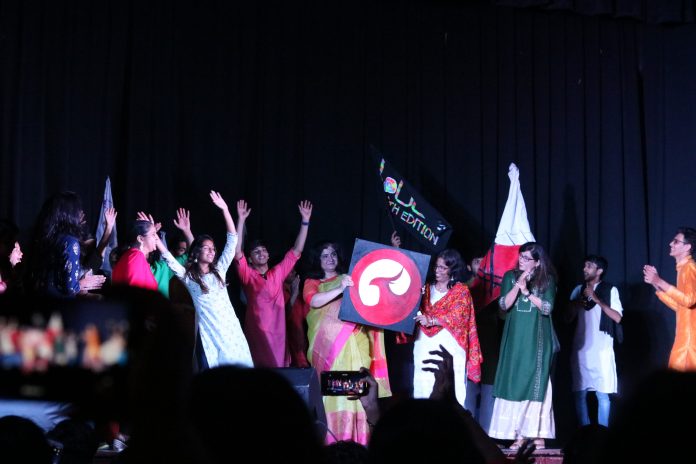 Mumbai: Kishinchand Chellaram College, Mumbai is organising its annual cultural intercollegiate fest, Kiran 2019 from the 16th of September to the 19th of September, 2019 with K2K as their title sponsor. Under the umbrella of Kiran, they have Kiran-Joule by the B4 students on the 16th of September, Kiran-Blitzkrieg by the media students on the 17th of September and Kiran itself on the 18th and 19th of September with Fiestron and Systematic Chaos. The event brings all the students together to celebrate four days of enthusiasm and determination to create a magnificent fest so as to take one’s breath away.  This year Kiran has taken another step forward with the theme named “Blurring the binaries”. It means putting aside all the differences and working as one, furthermore focusing on seeing things in grey rather than just black and white. Then Kiran-Blitzkrieg has its theme as “Academie Of Contrasts”- a unique blend of the organising committee serving as the jury and the contingents being nominated for the prestigious film awards. And last but not least Kiran-Joule has an extravagant and colourful theme called “Carnival” which brings out the child in one with photo booths, props, events, and even the joyous people.

Impelling the students, Dr Hemlata Bagla, Principal, KC College, said, “When we realized that student’s talents are boundless and not solely limited to academic boundaries, we created Kiran, an awe-inspiring platform for students to showcase their artistry.” she added “Kiran is an emotion that brings students from various streams together to experience a sense of belongingness and create fond memories. All the hard work that they put together for this fest is commendable as the entire college unites to make these four days memorable.”

KC College has kickstarted its annual fest Kiran 2019, with the entire star cast of Chhichhore and a grand entourage on 1st September 2019. Shraddha Kapoor, Sushant Singh Rajput, Varun Sharma, Tahir Bhasin, Naveen Polishetty, Prateik Babbar and Tushar Pandey played games and answered the questions of the students. It was the first time that the entire star cast promoted their movie in a college event, and they entreated the crowd to participate in Kiran 2019.

The next step in this journey was the eliminations for the main event which took place on the 9th of September, 2019. There were a wide array of events from dance to music to drama to literary arts. Few exceptional performances were put forward making it difficult for the judges to choose the top participants. Among the judges were, Bollywood choreographer, Roza Rana, and dancer, fitness enthusiast Rocky, who also boastfully displayed some of their moves in the end.

Advancing from the eliminations, the fest was officially launched with a curtain raiser event that took place on the 11th of September. It marked the inauguration of Kiran 2019 as well as the core committee introduced all the fests that unite together to make Kiran. Asif Basra was the chief guest for this event.

While addressing the audience, he said, “You all are students with the great caliber and bright future. This stage offers you a platform to display your talents and it also builds a path to your career.” His words of appreciation were a true source of inspiration for the students.

Kiran Spectrum, organized on the same day as the curtain raiser, by the junior college students, commenced the function with a bang. Staying true to their theme, the students put forward various different styles of dances- Classical, regional and western. The performances were breathtaking as the First Year Junior College students put their heart and soul into it.

Another event that took place on the same day was the Corporate Social Responsibility event organised by Blitzkrieg in association with Janta Janardhan Parishad, an NGO which provides a home for the elderly who have been abandoned by their families. Around 7 contingents participated in this work of goodwill and together they were able to donate 204 kg worth of ration (dal, sugar, rice, and flour) plus 3 blankets and 84 towels.

Apart from this both Joule and Blitzkrieg had their separate pre-events recently. On the 13th of September, KC college hosted “Aar ya Paar” , a sports event as a part of their annual festival Kiran Blitzkrieg. The game consisted of battling against each other with water guns and circle shaped paper filter rings as their head gear. The game consisted of a lot of obstacles, several challenges, and twists at every level. The game consisted of 5 rounds, all being knockout at difficulty increasing at every level. The game was held in the Sorcery turf of the St. Xaviers ground in Parel. 14 contingents came and participated in the game from various colleges. There was a Reporting event that was simultaneously going on apart from the sports event. One representative from each contingent had to go on and take interviews of the audience, the players, the participants, and the organizing committee. The stands were almost full and the uproar of cheers was constant. The students enjoyed watching the game quite a lot. Monster Energy India were the sponsors of the event and hence everybody got a free can at the ground.

1921 in an undivided India. The Late Vidyasagar Principal K. M. Kundnani and Late Barrister H. G. Advani, the founding fathers of the Board, fought against the onslaught of the circumstances after the partition and established many educational institutions in and around Mumbai. One of them, Kishinchand Chellaram College (K.C.), established in 1954, is one of the premier institutions affiliated to the University of Mumbai and recognized by the Government of Maharashtra. Adjudged the Best College (Urban Area) by the University of Mumbai, the institution has created a benchmark in the field of education. Re-accredited ‘A grade’ by NAAC, KC is recognized as one of the finest colleges in South Mumbai, which lays great emphasis on the holistic development of its students. The college offers a vast range of courses at the undergraduate, graduate and postgraduate levels.