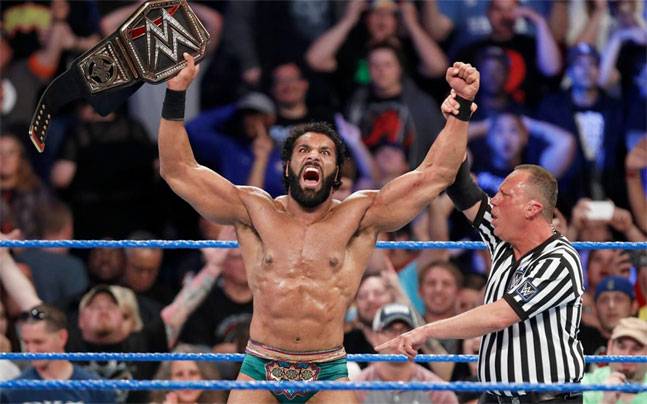 In his first title defence at the 50th WWE championship at Wrestle Mania Jinder Mahal shockingly defeated Randy Orton on Sunday at Backlash, Chicago, USA as Mahal won his first WWE Championship. Yuvraj “Raj” Singh Dhesi is a 31 year old, 6ft. 5 inch and 222 pond Indo-Canadian professional wrestler with his ring name Jinder Mahal. He is the nephew of wrestler Gama Singh and holds a business degree in communications and culture from University of Calgary, Canada.

The numbers game caught up to Orton. The Indian origin Singh Brothers (under their ring names Sunil and Samir Singh, collectively known as The Singh Brothers or The Bollywood Boyz) were a constant nuisance throughout the match, and eventually Orton delivered a double draping DDT to the pair to eliminate them from the equation.

While The Singh Brothers were no longer a factor, Orton still had to deal with Mahal. The Viper’s attention was elsewhere as he returned to his opponent. Mahal capitalized and hit the Khallas for the win.

Several weeks ago, Mahal surprisingly prevailed in a Six-Pack Challenge for the No. 1 contendership due largely to help from the debuting Singh Brothers.

Orton’s focus was on his House of Horrors match against Bray Wyatt at Payback, but The Maharaja made sure to establish himself as a threat by stealing Orton’s title the week before the event.

Mahal was elevated to that position and built to the point where he became a legitimate threat to beat Orton at Backlash.

The Apex Predator remained the favorite, however, especially with another foreign heel in Rusev jockeying for a WWE Championship match at Money in the Bank.

With Mahal defeating Orton, though, it seems likely their feud will continue and that it could potentially last through next month’s Money in the Bank pay-per-view.

This push from the WWE saw him pickup a clean pin fall victory over one of the Industry’s great Randy Orton, seems to be shocking one for the pro wrestling world but surely one that delights the WWE fans from India.