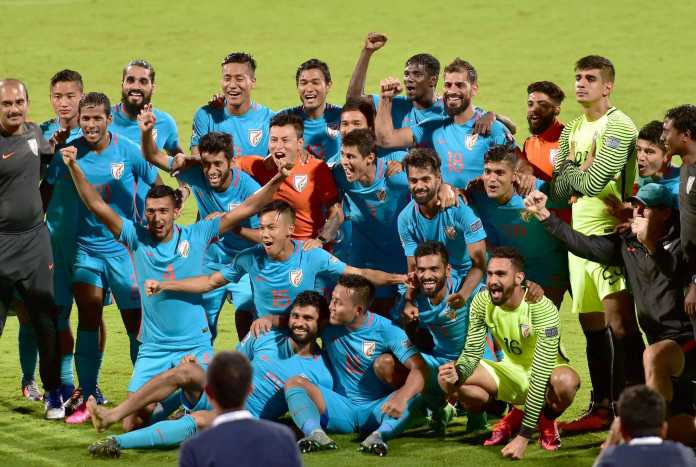 India may have not qualified for the much awaited FIFA World Cup, but they’ve certainly shown skill in the Intercontinental Cup on Sunday. The team defeated Kenya 2-0 with skipper Sunil Chhetri striking a brace.

The match was crucial for India, as it was held on home soil and they couldn’t afford a defeat. Sunil Chhetri and other stars such as Sania Mirza, Sachin Tendulkar and Virat Kohli urged fans to go and support the team. This seemed successful as an enormous crowd turned up at the stadium, giving much needed moral support to the Indian team.

The match, which was held at the Mumbai Football Arena in Andheri, saw India having a good start as the team kept attacking Kenya at regular intervals. The first goal came off a free kick, as Anirudh Thapa assisted Sunil Chhetri who flicked the ball into the net.

The second goal also came in the first half as Sunil Chhetri struck a goal in the 28th minute. The rest of the first half was rather uneventful. The second half saw Kenya trying to squeeze through the Indian defence, however, their efforts were highly unsuccessful. There were also a couple of brilliant saves from the Indian goalkeeper Gurpreet Sandhu.

This match stands as a huge victory for India as it has put India on the map for football. Sunil Chhetri especially has played well throughout the tournament and might get good club offers if he keeps up his form.

The huge fan turnout also shows that the fans are ready to let bygones be bygones and support their team even if it is in the smallest stages. The overall performance of India in the tournament and the positive approach of the fans towards the team tell us that India might be ready for bigger tournaments in the near future.