Cricket isn’t just s sport in India; it’s a religion. With India being the host for the ever-exciting ICC Twenty20 World Cup for the first time, 2016 is all set to be a thrilling year for the cricket fanatics

One of the biggest cricket sensations to hit cricket in the last decade, Twenty20 has taken over the world, and people’s hearts in a very short span of time. Ever since India’s historic win against Australia in the first edition of the ICC Twenty20 World Cup, we have remained hopeful for yet another spectacular win. In a country where cricket is likened to religion, the level of preparation and excitement is the country is no surprise.

What is the Twenty20 World Cup?
In order to know more about the ICC Twenty20 World Cup, you first need to know about what Twenty20 cricket is in the first place. Twenty20 cricket, often abbreviated to T20, is a short form of cricket. It was originally introduced at the professional level by the England and Wales Cricket Board (ECB) in 2003, for an inter-country competition between England and Wales. A Twenty20 game consists of two teams playing a single inning each, which is restricted to a maximum of 20 overs. A typical Twenty20 game is completed in three hours, with two 75-90 minute innings, one by each team, and a 10-20 minute interval. Being much shorter than the previously-existing forms of cricket, as well as being
closer to the time span of other popular team sports, Twenty20 cricket gained fast approval from the   spectators and cricket-lovers.
The ICC Twenty20 World Cup is the international championship of Twenty20 cricket. The World Cup is organised by the International Cricket Council (ICC), and currently comprises of a tournament between 16 international teams. It is generally held every two years, but there is a scheduled 4-year gap between the next two tournaments, 2016 in Indian and 2020 in Australia.

History
At the inception of the ICC Twenty20 World Cup, it was decided that the tournament would take place
every two years, barring the possibility of a Cricket World Cup being scheduled in the same year, in which
case the Twenty20 World Cup would be held a year earlier. The inaugural tournament was held in 2007
in South Africa. No Indian can ever forget India’s spectacular win against Pakistan at the event. The two associate teams that had played in the tournament were selected through the 2007 ICC World Cricket League Division One, which was a 50-over competition. December 2007 saw the decision to hold a qualifying tournament with a 20-over format to better prepare the teams for this fast-paced form of cricket. Two out of six participants would qualify for the 2009 World Twenty20 and would receive $250,000 (almost Rs.1.7 crore) in prize money. Pakistan beat Sri Lanka by 8 wickets in England in the second version of the tournament in 2009. The next tournament took place only a year later in 2010, which was won by England, who battled against Australia and emerged victorious in West Indies. The 2012 ICC World Twenty20 was won by the West-Indies, by defeating Sri Lanka at the finals. This was the first time that a host nation, as the 2012 finals took place in Sri Lanka itself, competed in the final of the ICC World Twenty20. It was also the first time the T20 World Cup tournament took place in an Asian country. 2014 saw a win by Sri Lanka in the host city of Bangladesh, with India coming up as the runners up.

The Current Scenario
Today, as we await with bated breath for the advent of the 2016 Twenty20 World Cup, we also await its arrival in India for the first time. Playing host to the event has everybody from the organisers to mere spectators like you and us very excited. ICC Chairman Mr Shashank Manohar, who attended the launch ceremony in Mumbai, said: “India is a country where cricket is a religion and not many places can match the passion for the game like India. I am fully confident that the Board of Control for Cricket in India will deliver an outstanding world cricket event, just like the ICC Cricket World Cups in 1987, 1996 and 2011.The ICC and BCCI are fully committed and will work together to make this a memorable event. I invite fans from across the world to witness fast-paced cricketing action on the field and enjoy the hospitality and culture of India, off it.” BCCI also seems to have gotten their game on point. BCCI Secretary Mr Anurag Thakur said: “We, as hosts, are fully prepared to organise one of the most entertaining spectacles in world cricket. We draw experience from hosting three ICC Cricket World Cups and are ready to make the ICC World Twenty20 India 2016 one of the most memorable events. Our preparations are in full swing, and BCCI and ICC is working together to make it a lifetime experience for the players and the fans. India is a vibrant country – young, full of colour, energy and exuberance – and is very much like the concept of Twenty20 cricket itself. We would encourage everyone involved with the game to experience the best of India.”

What should you look out for?
According to Vishaal Loganathan, News Head at Cricbuzz, international players like AB de Villiers, Ravichandran Ashwin, Glenn Maxwell, Virat Kohli, Chris Gayle and Kane Williamson should be on our list of players to look out for. “The spinners will definitely play a big role in the tournament, and thus, batsmen who can counter their threat will be the most vital Chris Gayle for their respective teams. With the relatively small grounds in India, batsmen who pack a punch, the likes of Chris Gayle, David Warner and Martin Guptill, will be keen on making the most of a hard new ball and fresh conditions. In the pace bowling depratment, Mohd Amir’s return to the Pakistan team holds a lot of promise, while Lasith Malinga, Josh Hazlewood and Mustafizur will look to add to their stature in international cricket, he says.

The Competition:
We are playing on home ground this time, but that does not eliminate the competition. So who do we focus upon as competition? “Africa and Australia have never won the tourney before, and they will be keen on opening their tally. Pakistan and Sri Lanka, like they have shown previously, can never be ruled out. England is showing a lot of promise this time around. But my pick would be New Zealand, despite them missing Brendon McCullum, to spring another big surprise,” says Loganathan.

The Indian Team:
According to the specialists, the Men in Blue’s strengths lie primarily in the duo, Virat Kohli and Suresh Raina. Virat Kohli is known for his aggressive play, and we are looking forward to his innings this time. Suresh Raina had also managed to impress the critics in 2015’s IDD Cricket World Cup, by saving the entire team from a defeat.
Loganathan says, “Batting has always been India’s biggest strength, and hence, Virat Kohli’s name will naturally appear atop the list. Ashwin has turned himself into one of India’s biggest match-winners over the past year, and he should revel in familiar conditions. Hardik Pandya and Jasprit Bumrah add a lot of value to the team despite their relative inexperience, and their performance will go a long way in paving the way for India in March.”

TOP PLAYERS TO LOOK OUT FOR 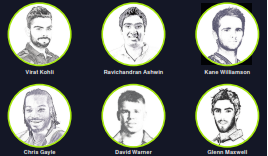