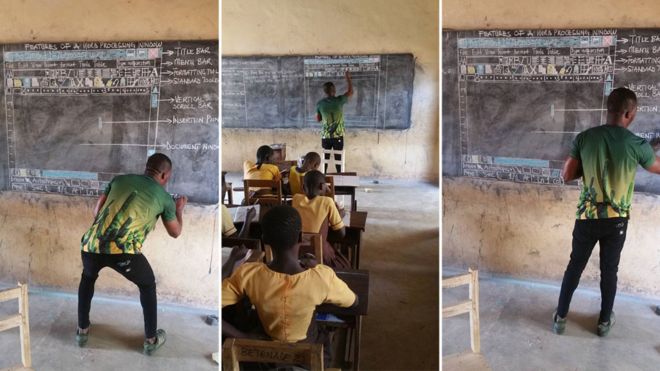 Despite the unavailability of computers in Ghana’s Sekyedomase town, Betenase M-A Junior High School’s Richard Appiah Akoto stopped at nothing to teach his students about computers.

He would draw an entire layout of the computers or software he was teaching, and would differentiate one icon/function from another with the help of coloured chalks on the blackboard, and explain them to his students. Picures of his unique teahing method went viral on social media, and particularly caught the attention of officials at NIIT Accra.

“We saw the news getting viral on Facebook and were so touched by the teacher’s dedication that we decided to support the school with the best we could do as an IT training organisation. We took a printout of the post and discussed the matter with our group CEO Kapil Gupta. He is the one who decided to sponsor five new desktops and books for the school and a new laptop for the teacher as a part of our social and corporate responsibility”, Ashish Kumar, the NIIT centre manager in Accra, said in a report. Akoto’s dedication also caught Microsoft Africa, and they invited him to their Education Exchange in Singapore, which marks his first time outside Ghana. Akoto said, “I wanted to teach them how to launch Microsoft Word. But I had no computer to show them. So, I decided to draw what the screen looks like on the blackboard with chalk. I have been doing this every time the lesson I’m teaching demands it. I’ve drawn monitors, system units, keyboards, a mouse, a formatting toolbar, a drawing toolbar, and so on. The students were okay with that. They are used to me doing everything on the board for them.”