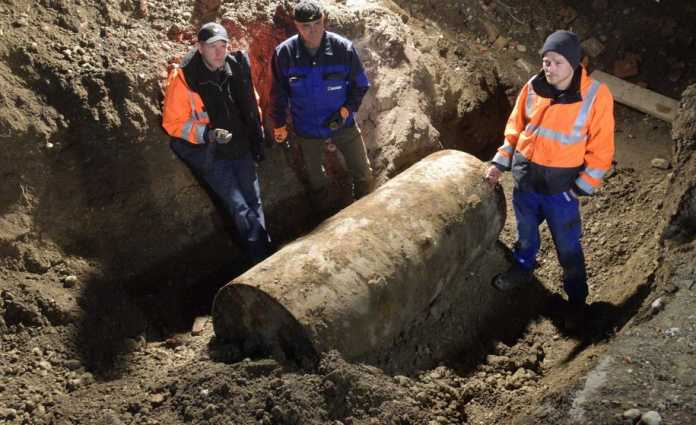 The people of Frankfurt re-lived a flash from the horrid past when a World War 2 bomb was discovered in the city last week. The explosive, from the war that destroyed Germany some 70 years ago, led to the largest evacuation in the country since the war. Around 70,000 people were evacuated from their homes on September 3rd 2017 and the experts later diffused the bomb safely.

The 4000-pound British bomb nicknamed “Wohnblockknacker” (blockbuster) was obtained last week in the city’s leafy Westend neighborhood, home to many wealthy bankers. The bomb, which was known for its ability to wipe out entire streets, was used by the RAF in air raids.

The operation included clearing off a 1.5 km radius around the bomb. A helicopter equipped with a heat-sensitive camera was used to explore the area to ensure the clearance. Firefighters, emergency service workers aided the operation where they evacuated people from offices and even patients from hospitals were relocated.

According to a report in the New York Times, the German officials have estimated that around 15% of the bombs dropped during World War II failed to explode, causing more than 2,000 tons of unexploded devices to be found each year. These kinds of events have become a routine in Germany, hence the officials were prepared to deal with such incident. Experts mentioned that bombs are as destructive as they were so many decades ago and fortunately, German officials are well experienced at dealing with explosives.

Here are some recent bomb scares that Germany witnessed-

Such occurrences are a not only a reminder and reflection of what a country went through during a war but also makes us wonder how a nation is still dealing with the aftermath of the war, seven decades later.