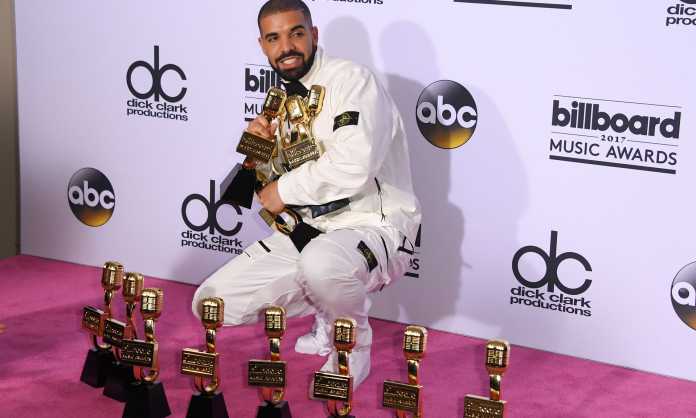 The Canadian rapper Drake swept the show with 13 wins at the Billboard Music Awards 2017 on Sunday night in Las Vegas breaking Adele’s record of 12 wins in a single night in 2012.

During his Top Artist speech he pointed to Nicki Minaj as he said ‘I got the love of my life up here too’.

When Drake received his thirteenth award that broke Adele’s 12 awards record he encouraged her by saying “Hold tight, Adele, because when a new album drops, you’ll fall back to get the record back.”

While he accepted the last award and was surrounded by two dozen people that included his father, Lil Wayne and Nicki Minaj he said “I got my whole family up here”

Drake is now a member of the elite musicians group, the number of which becomes 4 with the entry of the Canadian rapper. All the four members are the only ones to receive awards in double digits. Whitney Houston back in 1993, was the first to become an elite musician earning 11 Billboard awards.

Usher came out to be the next one, repeating Houston’s feet in the year 2004.

The British singer-songwriter Adele collected a dozen awards back in 2012 for her blockbuster album 21 becoming the third member of the group.

A number of other artists earned a couple of noticeable awards too. Beyonce and Twenty One Pilots earned five apiece: She won top female artist and top R&B artist, among others, while Twenty One Pilots took home the award for best new artist. The Chainsmokers singers and composers of one of the most famous tracks won three awards.

The American DJ/producer duo consisting of Andrew Taggart and Alex Pall took home four awards and the Top Country Artist prize was given to Blake Shelton.

Drake  ended his winning speech by giving the world a piece of advice “Someone wise once told me life is like toilet paper,” he said. “You’re either on a roll or you’re taking a shit from someone.”

A Drake fan is having that tattooed on his or her torso.