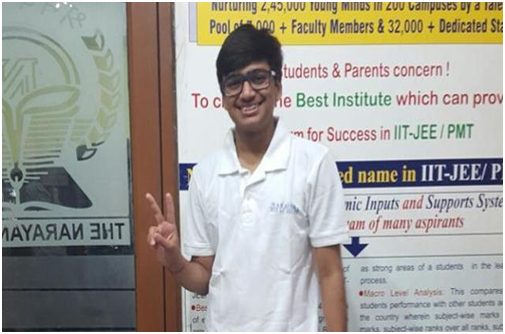 According to the rank list released by the Central Board of Secondary Education, Deepanshu Jindal of Delhi topped the JEE main rank list 2016. JEE is a joint enterance examination for all Indian engineering students. Jindal ranked 53 in the JEE (advanced). Pratyush Maini from Gurgaon and Rajesh Bansal secured the second and the third position respectively. Around 11.28 lakh students have appeared for these exams and the results were declared a week in advance as compared to last year.

Jindal, a student of SD Public School, Pitampura wishes to study computer science at IIT Delhi.  He told the Times of India,” I guess my Class 12 boards results were alright. I did fairly well. I don’t want to sound like I’m bragging.”  He thanks his father for grounding him in the subject of mathematics and says that his father has been teaching him since his initial years.

Jindal’s success did not come easy to him and he had to work for 12 hours per day for the last two months before the qualifying examination. He joined coaching classes in Class 11. The Delhi boy spends four to five hours on social media. He also enjoys playing sports like cricket and football.  Even though his parents found it a waste of time he felt that it was necessary to take a break from the strenuous routine.

The all India rankings are based on Class 12 scores (40% weightage) and their JEE main score (60% weightage). During boards CBSE students have done well getting 12 of the top 20 ranks. These rankings grant students admissions to BE and B-Tech courses and courses in engineering institutions like NIT’s. IIIT’s are also selected on the bases of these rankings.