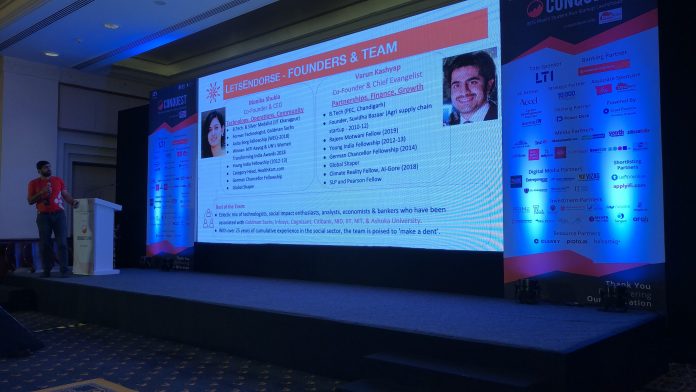 As the sun quickly climbed up on a cloudy monsoon Sunday in Bangalore a group of twenty-odd college students walked into the banquet hall of The Leela Palace Bangalore on 28th July, barely able to contain the thrill that came with hosting the finale of India’s largest student-run startup accelerator, Conquest.

Over 650 startups had registered, only the best 11 remained for the fifteenth edition of Conquest, which had LTI as their title sponsor and was backed by Accel Partners, Lakshmi Vilas, Deskera, Nasscom and Liva among the sponsors. These startups had been subject to mentorship from industry stalwarts since May and recently stayed for a week in Bangalore to attend investment sessions and workshops full of actionable insights to improve their pitch decks.

The day began with the registration of all the distinguished invitees. The Director of BITS Pilani, Pilani Campus, Professor Ashoke Kumar Sarkar, started off the event narrating his experiences with Conquest and how it has evolved over the years. Shortly after, our Chief Guest, Mr. Bala Girisaballa, President of Techstars India, then addressed the audience, stressing upon the need for startups to be inch wide and mile deep initially.

The stage was set for the startups to deliver their pitches. The first session featured pitches from five startups amongst the finalists. This was followed by the first discussion of the day on “Decoding Markets – Potential, Growth and Saturation”. The panel featured Mr.Aadil Bandukwala – Chief Evangelist and Vice President Marketing at Belong.co, Mr.Rajesh Raju – MD at Kalaari Capital, Mr.Pratik Poddar – VP at Nexus Venture Partners, Mr.Raghava Rao- CFO at Amazon India and Mr.Satyakam Mohanty – Founder at Lymbyc.

It was then time for the networking lunch, where the attendees had the opportunity to meet and get a chance to share ideas, thoughts and connect all the right dots. Everyone could be seen scattered in groups, deep in conversations.

Following his speech, the second session of startup pitches started off for the remaining six finalists. The second panel discussion was held after this, the topic being “Early stage v/s Growth- How a company changes?”. This panel consisted of veterans, with the likes of Mr.Abhishek Nayak – Serial Entrepreneur, ex Co-founder and CEO at Gharpay and Bicycle.ai, Mr.Barath Shankar – Partner at Accel, Mr.Abishek Surendran – Partner at Pi Ventures and Mr.Anuj Rathi – Vice President Product at Swiggy. Moderated by Mr.Nayak, the conversation dived deep into the finer details of starting up and the diverse range of experiences the panel had.

The keynote speaker, Mr.Akhil Gupta, co-founder, NoBroker, a country-wide platform that connects flat owners directly to their tenants, took the stage to talk about his experience as a founder and shared his valuable insights on the current rental market scene in India.

The stakes were high, as the winner would walk out with a cash prize of 3 lakhs, while the runner’s up would take away 2 lakhs. The Leads of Conquest’19, Ishan Joglekar and Sakshi Choudhary came up on stage to deliver the final vote of thanks, showing the gratitude of Team Conquest to all the people who helped in this journey.

Ishan & Sakshi, Leads of Conquest’19, then announced the winners of Conquest 2019; Team ScoutMyTrip, A DIY road trip planner & marketplace of travel experts who can be hired to curate and provide virtual trip assistance,  and Team HR BOT, an AI-based remote hiring platform that can identify potential job seekers in small towns and create their profile using automated chatbots, winners and runners’ up respectively.

With emotions running high, Conquest 2019 came to a grand close. Indeed, the event was a resounding success, and the esteemed guests left having gained a little more knowledge and experience from the event and having left their own mark. We eagerly wait to see what the Team has in store for Conquest 2020.