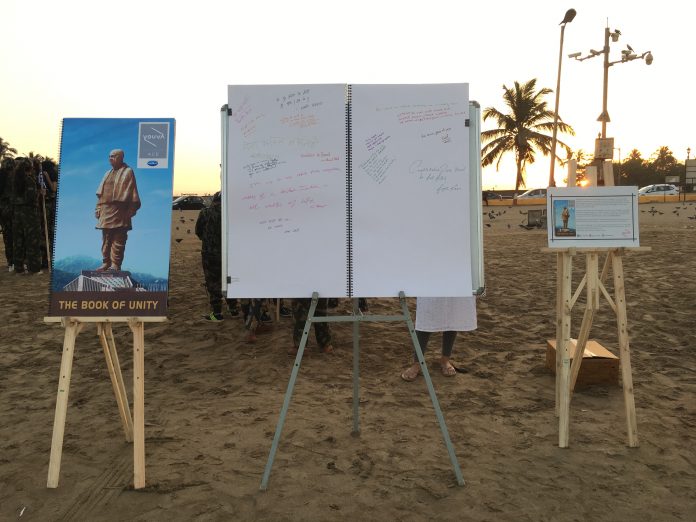 Mumbai: 24th February – Youva, from Navneet Education Limited unveiled the Tallest Book in India, “The Book of Unity”, as part of the “Youva Unites India” initiative. The event kick-started early in the morning of Friday, 22nd February at HR & KC college junction at Churchgate and after doing the rounds at several eminent locations around Mumbai over the next two days, culminated on Sunday, 24th February at Equal Streets, Bandra to Santacruz.

Day One of the event witnessed the Book of Unity travelling through the busy streets of Churchgate, Azad Maidan and Marine Drive with the youth sharing their views about Unity. The day saw a beautiful patriotic performance by kids from the NGO, The Candle Project followed by a flash mob to patriotic songs and a moving poem recital centering on Unity.

After a great response from Day one Youva Unites India stepped into Day Two covering the streets adjoining National College, around Thadomal Shahani Engineering College and signed off the day on a high by performing at the Carter Road Promenade in Bandra.

As the sun rose, Day Three began early at Juhu beach, witnessing the early morning walkers & strollers supporting the performance and penning down their thoughts in the tallest book in India. The culmination of “Youva Unites India” was at Equal Streets, wherein hundreds of people came together to have their voice heard by writing their thoughts about Unity in the tallest book. The event was the perfect closure to the activity where the streets are open to art, games, dialogue & people coming together as one.

India’s tallest book is all set to be sent across to the Office of the Honorable Prime Minister of India.

Commenting on the grand event, Youva Unites India, Shailendra Gala, Director Navneet Education Limited says, “I am extremely overwhelmed to see the amazing response Youva has received all the three days for the tallest book of India, Book of Unity. I am thrilled to see the Youth, the future voice of India, coming together and writing their thoughts in the book created by us. The inspiration behind the tallest book is the Iron Man of India, Sardar Vallabhbhai Patel, who played a vital role in uniting India. We thank every individual who has been a part of this journey and look forward to creating many such unique products which will reach thousands of individuals”.

The Book of Unity has been conceptualized & and manufactured by Youva in-house to commemorate the tallest statue in the world today, The Statue of Unity which stands tall near Vadodara in Gujarat.

About :
Launched by Navneet in 2016, Youva is a new stationery brand for paper and non-paper stationery – “Youva-It’s cool “designed keeping the youth of India in mind. The youngsters of today are the path makers of tomorrow. To cater to their choices and their way of thinking, we made Youva. Every product of Youva resonates with the ideology, passion, and enthusiasm of young India

Event hosted by Navneet Education Ltd to unveil the Tallest Book in India, “Book of Unity”