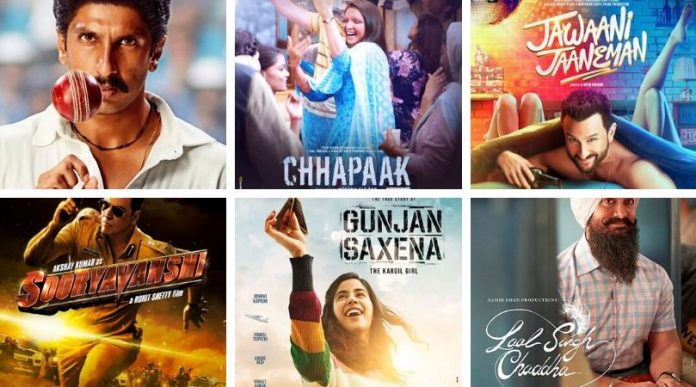 You are going to spend the maximum time of 2020 in the movie theatres. You know why? It’s because the biggest Bollywood movies of 2020 are all set to roll out and take the movie fans for one heck of a ride! These are movies that we have been waiting for since the end of 2018. Yes, since that long.

So grab a bucket of popcorn and fixate your eyes on the big screen from today itself! Here is a list of Bollywood movies of 2020 that you must watch:

The movie was released on Friday, 10th January and is already having a deep impact on the hearts of the audience. It’s one movie that you definitely shouldn’t ‘boycott’! The film stars the ever beautiful Deepika Padukone and the super talented actor, Vikrant Massey. The film is directed by Meghna Gulzaar.

This movie stars Ajay Devgan, Kajol, Saif Ali Khan and is directed by Om Raut. As the name suggests the movie is based on the life of a historical character named Tanhaji, a military leader in Chhatrapati Shivaji’s army.

They are back to set the screen on fire with their stupendous dance moves! Varun Dhawan and Shraddha Kapoor are once again going to be seen sharing the screen with the god of dance, Prabhudeva. The movie is directed by Remo D’Souza. Have you seen the song?? It’s insanee!!!

This film is based on the life of a Kabbadi player named Jaya Nigam which is played by Kangana Ranaut. Richa Chadda and Jassie Gill too are a part of the movie.

The movie is going to bring to us romantic chemistry between Saif Ali Khan and Tabu for the first time. It is a movie in which Saif plays an ‘accidental father’. Sounds fun isn’t it? We are sure this one is going to grip our mind to this fun storyline.

Ayushmann Khurana is back with his sequel of Shubh Mangal Saavdhan and we have no doubt that this movie too is going to make a massive box office collection. The movie aims to raise awareness about homosexuality.

Bhoot: Part One – The Haunted Ship

This horror-thriller has Vicky Kaushal and Bhumi Pednekar. We are already excited! Are you?

The True Story of Gunjan Saxena – The Kargil Girl

After Dhadak, Jhahanvi Kapoor is set to meet us with her next movie. A biopic of Gunjan Saxena will narrate a story of India’s first Air Force woman officer who went to war.

Remember the time when Singham and Simba left us feeling all ‘Bollywood’, well it seems that Akshay Kumar is planning to do just the same with in Suryavanshi. Besides, it’s a Rohit Shetty film so it’s sure to make us have a good time.

This film too stars Jahanvi Kapoor along with Rajkumar Rao and is a comedy horror. This Dhadak actress is going to play a double role.

This movie is bringing us the duo of two absolutely wonderful and loved actors, Irrfan Khan and Kareen Kapoor Khan.

Don’t we always love to see the love birds, Ranveer Singh and Deepika Padukone on screen? Well after a long long time, the Mr and Mrs are going to be seen together. The film is based on the historic victory of India in 1983 in the Cricket World Cup.

An iconic movie that made our childhood days is having a remake and includes actors that are not just cool but also funny. Sara Ali Khan and Varun Dhawan are going to replace Govinda and Karishma Kapoor in this David Dhawan film.

Etching their charms in the minds of the young Indians, Ananya Pande and Ishan Khatter have created a lot of buzz for their next film.

Who wouldn’t want to watch a movie directed by Mahesh Bhatt. Sadak 2 is the sequel of Sadak and stars Sanjay Dutt, Alia Bhatt, Pooja Bhatt, and Aditya Roy Kapur

After driving the crowd crazy with his performance in Kabir Singh, Shahid Kapoor is all prepped up to thrill us again with this movie. Jersey is the Bollywood remake of a Telugu movie in which Shahid plays a cricketer.

Farhaan Akhtar and Rakeysh Omprakash Mehra have joined hands once again after Bhaag Milkha Bhaag with another sports drama.

What is a year without the release of Amir Khan’s movie? He is back with the Hindi remake of Tom Hank’s 1994 Hollywood film, Forrest Gump. Kareen Kapoor Khan too will appear in the film as the lead character along with Amir.

Finally, we have a Karan Johar film that is coming to us with Kartik Aryan, Jahanvi Kapoor and Lakshya Lalwani playing the lead roles.

This is one word that has intrigued us so much since the past one year. Alia Bhatt and Ranbir Kapoor are going to be sharing a screen for the first time and we can’t watch the couple develop chemistry on screen. Amitabh Bacchan too is going to be seen in this film which is directed by Ayaan Mukherji.

The movie brings forth how women are judged in the Indian society. What makes this movie so special is that it has Ranveer Singh in the lead role.

Takht is believed to be a huge budget film from all the other Bollywood movies of 2020 given that it stars all the big, established and popular actors. It’s a Dharma film and is sure to make many conversations pre and post its release.

Although many didn’t quite like the idea of having anyone else han Akshay Kumar in the sequel of Bhool Bhulaiyaa since it was such a big hit, we must look forward to Kartik Aryan’s performance.

Phew!! That was a long list wasn’t it? Well the longer the better, because these are going to be some great movies of 2020 which will definitely be worth watching. So walk in the theatres with friends, families or alone to watch these movies of 2020, but don’t miss out!