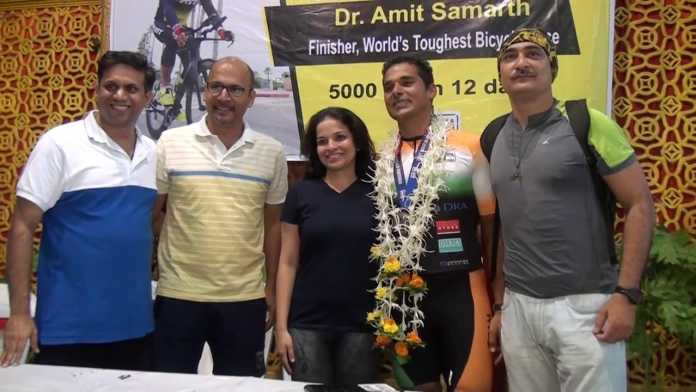 Dr. Amit Samarth made news last year when he successfully completed the Race Across America (RAAM) in just 11 days 21 hours and 11 minutes on a bicycle. The race was 5000 kilometres long from Oceanside, California to Annapolis, Maryland.

He is the first Indian to achieve this feat. However, he hasn’t stopped here. Now, he is looking to conquer the rough terrains and weather of Russia. The Trans-Siberian Extreme race will start on 24 July and the race will take place from Moscow to Vladivostok which is a distance of 9100 kilometres. The race needs to be completed in 15 stages within 25 days.

The race is one of its kind and if Samarth wins, it will be a huge victory not only for him but for the country as well. It’ll surely give other cyclists and even other sportsmen something to be inspired about.

Samarth has already inspired fellow sportsmen with his win in the US and a victory at the Ironman Challenge in Australia. Here’s hoping that he’ll win this too.

Samarth is though in requirement of money to participate in the event. He needs around 10 lakh rupees for the same. He has managed to collect 4 lakhs and is in need of six more. Hopefully, he’ll manage to get the amount before the race starts next month.

He also wishes to open a school in his hometown if Nagpur which focusses on endurance sports such as triathlon, cycling, running, field events such as long jump, swimming etc. He hopes he can promote sports in his hometown and children of all age groups will participate in such events.

The country should support his endeavours and help him financially, as well as boost his morale. These kinds of sportsmen help the country move forward and be recognised globally for its good rather than its bad.