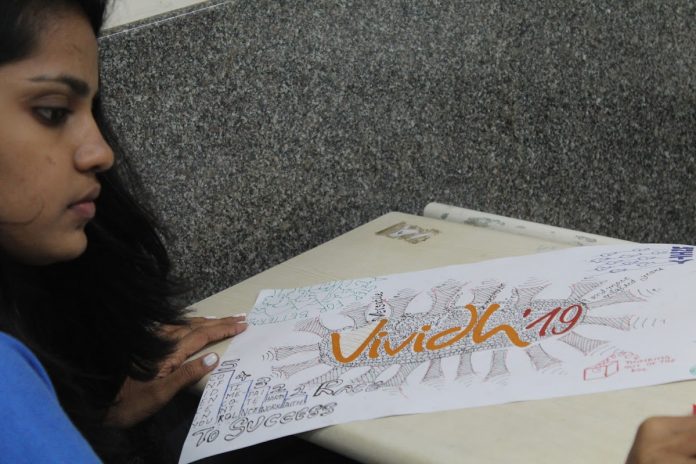 Vividh, an inter-college cultural festival of SVKM’s Pravin Gandhi College of Law began on 21st February and went on till 23rd February, celebrating the elements worth breaking the internet in the 21st century.

Vividh’19 began on an advocating note, by organizing the first-ever Mock Parliament in its 10th edition, containing its own uniqueness and essence. The minds and the opinions involved in the same made the event a remarkable one. The judges presiding over the committees ensured that the participants have some thought to go to with them. Along with this the “Night Cricket” received a lot of interest and active enthusiasm by the participants. It was an engaging fun activity for the budding cricketers in the field.

The second and third day of Vividh’19 had multiple events, diverse in their own special way. The events included- Performing arts, Gaming and sports, Fine arts, Informal, Literary arts and management events. And to top all of these Vividh’19 had it’s “Megacrossover” named- Outlander.

The events went on smoothly while there was magically created by words, drama with exotic expressions, war among the participants, various sports involved for fitness freaks, games engaging the experts in that field, craft with blind eyes because with open eyes is too mainstream, and events testing your entrepreneur skills, all the elements one could imagine of were present. One could imagine how fun and hectic the mega-crossover would be, combined of everything built over an isolated island, only the fittest could survive, the one who strived for the necessities and reaching the tail of the net. The rush began right in the morning and went up to evening, the hustle was real and so was the participation, Team Vividh appreciates and values the presence of all the participants.

Those three days were hard word of Team Vividh’19, the memories, the fun, the friendship, the joy, thousands of moments to cherish for life happened in those very three days! And Vividh boarded the train of success reaching to the last of breaking the internet. We will be back next year with the same enthusiasm, triple fun and a whole new set of unique and events, the wait is worth it!