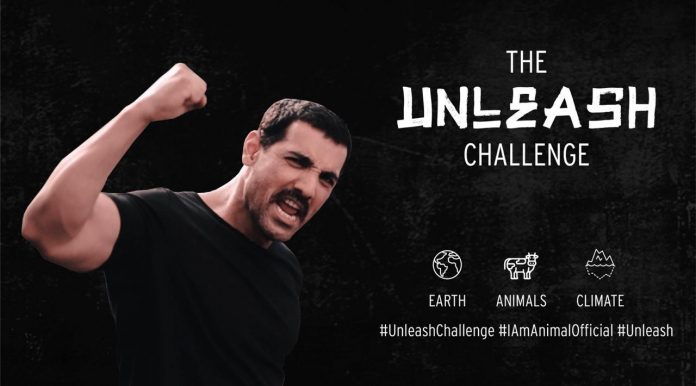 10th July 2019: UNLEASH, featuring John Abraham, Jaqueline Fernandez, PETA founder Ingrid Newkirk and international influencers Earthling Ed, Joey Carbstrong and James Aspey amongst a slew of other known personalities, is the first release by “iAmAnimal”. iAmAnimal is a musician seeking to build an inclusive platform for those like him, who use art & creativity to channel, express and raise their voice and create awareness to fight the biggest social injustice of our time – Animal Agriculture and its subsequent consequences on our planet.

Written and performed by Kunal Avanti, one of the forces behind iAmAnimal, UNLEASH is a song about compassion,  accompanied by a powerful, emotionally charged video that will leave you captivated, uplifted and inspired to make a change.

Besides being shot in the breathtaking Himalayas and being beautifully put together, what really works for this video, is that it manages to deliver the message of hope and compassion towards the animals and the planet, without using any graphic imagery whatsoever. Avanti says that from the very beginning of the project, him and partners Blue Vector felt that it would turn people away and work against the objective of the film. They instead chose to go with carefully curated footage from events, celebrities, sanctuaries, influencers, and demonstrations from around the world.

Unleash is most certainly a project about the animals, but more so an ode to the real-life heroes that fight for them relentlessly day and night whether at the slaughterhouses, laboratories, circuses, zoos or on the streets!

More than just a song about animals and animal welfare, UNLEASH reminds us to sit up and take notice of the damage being done to the environment because of the choices that we, as human beings make. The unnecessary slaughter of intelligent animals, deforestation, global warming, water depletion and the horrific conditions of our oceans are just some of the negative consequences of human behaviour, and the time is now for us to do something about it and make a change.

A Call to Action

“We wanted the feeling to induce action” says Avanti, and so the Unleash video leads to www.iamanimal.co an edgy and quirky website with links to numerous animal welfare and activism organisations around the world. So whether you want to contribute to the apes in Africa, help protect marine life, rescue dairy cows in India, or help fight the dog meat festival in China, it will allow people to do their part and give back by supporting a cause of their choice. All donations will go directly to the chosen charity through direct links through the iAmAnimal  platform

The website also includes an interesting ‘ACCEPT THE CHALLENGE’ tab which leads to sign up for a 7-day challenge where Neha Ranglani, celebrity plant-based nutritionist gives tips for all days on how to take on the challenge like a champ.

The challenge will be shared by various celebrities and influencers and the idea behind it is to give people a taste of a plant-based lifestyle and show them that it’s as easy as 1..2.. 3..

The video will be aired exclusively on VH1