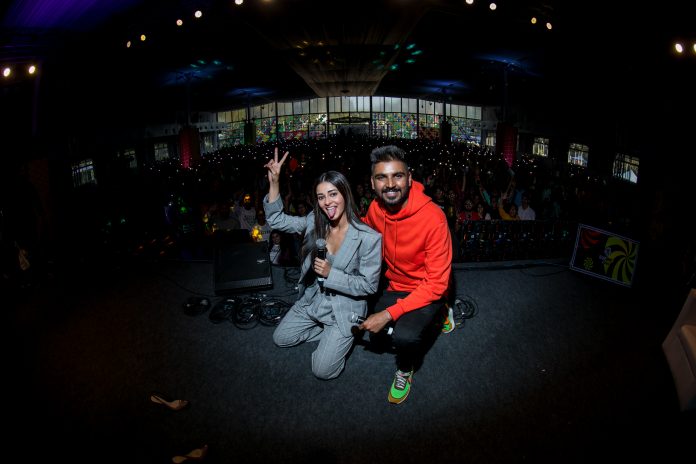 The seventh edition of the Under 25 Summit, the largest youth event of the nation, witnessed over 8,000 students from across India at the iconic Jayamahal Palace, Bengaluru on Saturday, 1st February 2020. Taking lead as the pioneer, the festival provided a platform for the youth to gain unparalleled insights into the creative arts through productive conversations with over 250 speakers. Focusing efforts on every alternative approach that has surpassed the conventional education system, this edition is themed around celebrating confusion, a thought that has repeatedly formed the underbelly of this youth movement. The event witnessed celebrity attendance by Ananya Pandey, Aisha Ahmed, Yashaswini Dayama, Trina Dutt, Viraj Ghelani among others.

The Under 25 Summit 2020 involved two stages the #TakeYourStand stage and the Camp Tinder stage. The festival created a buzz with speaker sessions, panel discussions, experience zones, and live performances.

Day 1 on TakeYourStand stage set off with a mind-blowing performance by Trina Dutt. She lifted spirits with ‘Love on the Brain by Rihanna: Cover’ and the classic ‘Set fire to the rain: Adele’.  In an engaging session, Niranjan Mukundan, Indian para-Swimmer and listed on Forbes U30, and Harshwardhansinh Zala, the drone creator, influenced the crowd to take the path of entrepreneurship.

At the large forum, the panel discussion with Viraj Ghelani, Filter Copy star, and actors Yashaswini Dayama and Aisha Ahmed anchored some of the most important issues of the youth culture such as taking responsibility of your own actions, narrowing the gap of equality and getting out of your comfort zone.

Anto Philip, Co-Founder at Under 25, stated “Under 25 Summit aims at providing a one-stop congregation to bring out the creative abilities that prevalent in the youth. The response on Day 1 has been amazing. We are grateful for having youth icons such as for Ananya Pandey grace the event. She embodies all that we stand for. An epitome of hard work and dedication, she pursued her passions and became an actress. A positive digital influencer, she spreads the message of kindness and positivity.”

On CampTinder stage, musicians such as Damarok, Rishabh Elliot aka Eli, Varshita aka Huyana, Sidharth Bedi and Raghav Meattle set the stage on fire with their beguiling melodies. Megha Rao, a well-read poet published on ScoopWhoop, recited poems about the sacred female body and personality traits of different people. A power-packed performance about celebrating failures by looking at the brighter side was met with a round of applause. Another performance by the crew ‘Intruders’ with helmets and racing uniforms left the audience roaring with cheer.

Instilling confidence in the youth, entrepreneur Raj Shamani recounted his story of reselling products, taking him from rags to riches. An insightful panel discussion with Devangana and Mahesh by Teach for India raised issues of national essence such as political leaders, democracy, secularism at stake and educating the underprivileged.

Under 25 has definitely come a long way since its inception 6 years ago. Successfully, acknowledging and manifesting the changing mindset of Gen Z, the largest youth brand is scaling heights year after year. After achieving momentous success on Day 1, the event will feature an exciting Day 2 with speaker sessions, workshops, gaming arenas, a flea market, art showcases and tons of new experiences by renowned names such as Sarah Ali Khan on Being a Proper Lady in Today’s World, Rana Daggubati on Careers and Technology in Entertainment Industry, Anushka Manchanda on Habits that Changed my Life, Abish Mathew and Chandan Rain on Lil Bish N Chandan on Buttons, Vidhu Vinod Chopra on Fireside Chat and Anupama Chopra on How to See more than What you See.