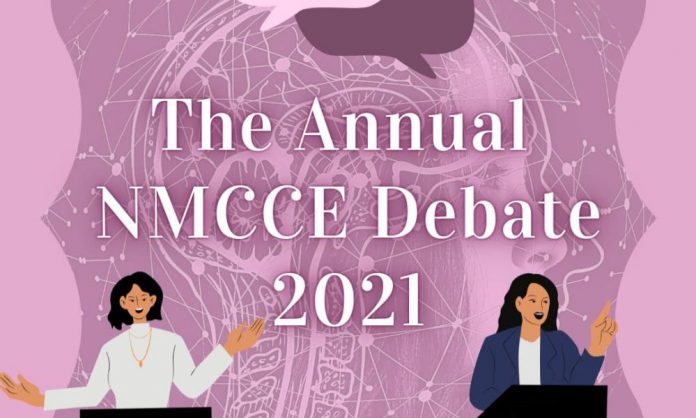 Effervescing enthusiasm, riveting discussions, cogent arguments, and a community of intellectual studs— these were the key ingredients that made Debating and Literary Society’s flagship event, ‘The Annual NMCCE Debate 2021’, sponsored by The Craft House 7, a highly successful endeavour. Graced by an esteemed panel of adjudicators— Pranay Thakkar, Nickil Chopraa and Paroma Raha— with an envious catalogue of experiences, achievements and accolades under their belts, and DLS’ respected teacher-in-charge, Prof. Sneha Vaskar, the event offered the perfect platform to budding debaters, enabling them to partake in relevant socio-political koreroes. Instituted as a European Square x Oxford Style Debate, 16 sprightly teams from various prestigious colleges and universities across the country were pitted against one another to hone their debating skills and knowledge on various pressing issues in the world today. The unique format also facilitated the participants and the audience alike to glean a holistic view of the motions that were debated.

The first round of this fiery debate began at 4:15 P.M. sharp with the 16 teams grouped into four different rooms under the guidance of two taggers and two well-versed adjudicators from Team DLS. Each team consisted of a Prime Minister and a Foreign Secretary. The motion that sparked off the challenge was ‘This House believes that everyone should have Universal Basic Income’. A contentious subject with a nearly equal number of pros and cons, to say that the session was stimulating would be an understatement. With such a talented host of debaters putting forth commendable performances in terms of both, the arguments presented and POIs raised, a nail-biting competition ensued. The 4-minute time crunch per speaker, inclusive of the 30 second protected periods at the beginning and the end, added to the thrill. After intense deliberation, considering the cut-throat nature of the round, the adjudicators across the four rooms gave their feedback and deemed 4 out of 16 teams eligible to compete in the semi-finals.

After an exhilarating first round, the semi-finals commenced at 4:45 P.M. with Team DLS addressing the esteemed panel of judges and Prof. Sneha Vaskar. The round kicked off with the motion, ‘This House believes that cryptocurrencies should be encouraged’. Following 15 minutes’ worth of preparation time, the contenders offered thought-provoking arguments and insights on the burning issue. The semi-finals proved to be another nail-biting round with the cogency of the arguments and the piquancy of the rebuttals unparalleled. At the end, the supremely worthy Team Germany and Team France qualified for the finale. Adjudged by the scholarly adjudicators who were mighty impressed with the performances, the round culminated on a largely satisfying note, setting the tone for the Grand Finale.

The Grand Finale ensued a head-to-head battle of wits with the motion, ‘This House believes that media houses have lost touch with reality’. Following the same route, 15 minutes were allotted to the finalists to familiarize themselves with this infamously topical affair in today’s times before opening the floor to debate. The Grand Finale, as expected, proved to be yet another round of sheer exhilaration, with The Proposition Team emerging victorious. Thus, the motion was unanimously passed. The winning debaters, Harshit Bhavnani and Rohan Joshi, secured a cash prize worth ₹500 each, and the first runner-up, The Opposition Team, received a gift hamper. Gift vouchers by The Craft House 7 were offered to all the talented participants as well.

To sum up, the event, a coalition of education and entertainment, was a resounding success. It offered not only valuable insights into the motions being debated, but also an opportunity to interact with highly experienced speakers in order to sharpen their own debating skills. A learning opportunity for all!

Team DLS would also like to express immense gratitude to its Official Press Partner, Youth Incorporated, for immortalizing the proceedings of this memorable event.