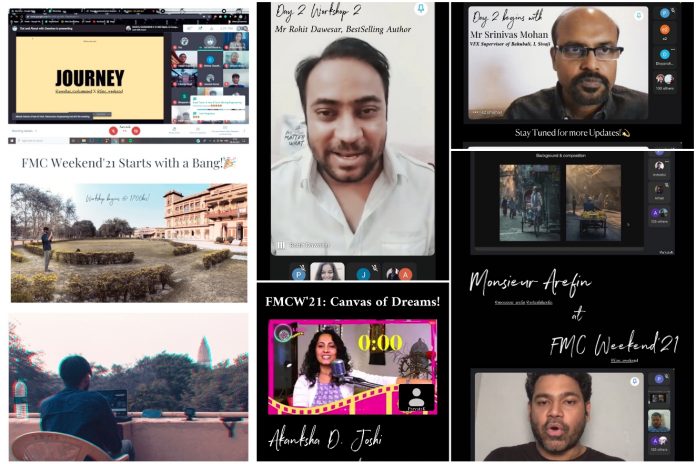 The seventh edition of the most awaited fiesta of IIT BHU, ie FMC Weekend, was successfully convened virtually from 9th-11th April. FMC Weekend is the annual fest organized by the Film and Media Council for the promotion of digital arts. The Film and Media Council is one of the five student councils of the institute. It aims to encourage and promote digital arts among the students. It encompasses 6 clubs covering the domains of Photography, Cinematography, Animation, Media, Creative Design and Social Outreach.

It was a congregation worth remembering for the attendees. The theme for this year’s edition was chosen to be ‘Canvas of Dreams’. Moustache hotels were the title sponsor for this year’s edition, while the fest was powered by PicsArt, and co-powered by Indian Film Project and Adcom.
For the last six years, participants have had the opportunity to exhibit their talents and win coveted prizes. The seventh iteration of this one-of-a-kind fest too saw enormous participation in various writing and digital arts events which were judged by distinguished personalities like Varun Vagish, Swarnima Telang and others. Apart from the intriguing events, workshops were also organised which allowed participants to polish their skills. Rohit Dawesar, Srinivas Mohan and Owen Davey are only few of the names who enlightened the attendees and shared their experiences with them.

FMC Weekend’21 saw colossal participation from people coming from various parts of the country and the world. While certain aspects such as movie screenings and live events couldn’t have been a part of this year’s edition, the fest has been able to fetch a much wider reach this time. All in all, the FMC Weekend’21 turned out to be an emphatic success, and the fest promises to be back with increased vigour for the next edition.
for an exciting learning experience, stay tuned for updates from The Film and Media Council, IIT BHU.