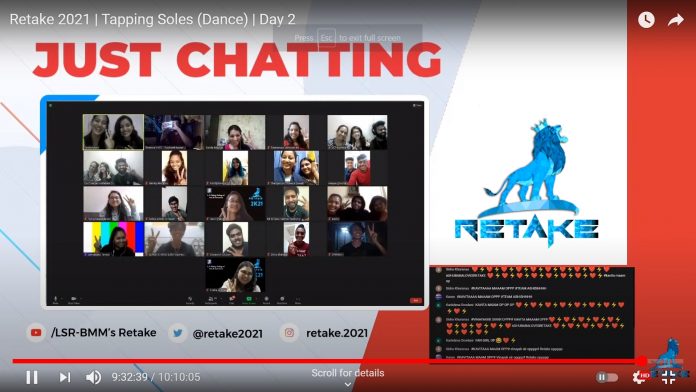 2020 was an anomaly of a year. The rhythm of the world was disrupted by the tragic events that took place. From schools to offices, many aspects of life had to be shifted to an online medium. There were question marks on how fests could even take place with restrictions all around, defying the norms Retake delivered a spectacle on a partially national scale for the 2021 edition of the beloved fest.

The first day of the fest started off with the inauguration ceremony and the prayer ‘Saraswati Vandana’ was sung beautifully followed by the traditional lighting of the lamp. After the ceremony, the first event, Gaming Call of Duty: Mobile commenced in which Mostly Sane emerged victorious with superior skills. ‘Rebuttal Panel’ and ‘Targeted Buzz’ were activities based upon brand promotion and day one was capped off by the Candid Talk Show where all contingents showed off remarkable ability and conversation skills. The second day began with a national short film event ‘And Action’ where the contingents presented their cinematic artistry while also spreading powerful messages. There were also other events such as ‘Happy Hours’ which was a laughter riot and Tapping Soles’ where the contingents showed off their dancing abilities.

The final day of the fest started with the vlogging event ‘Be Your Contingent’ but the grandeur of the Grand Entry was something to behold. Contingents came up with some ridiculously creative ideas to win Team Retake over. Be it banners, face paints or games, the Grand Entry had it all. The last event of the 3 day long fest was ‘Raise Your Mic’ where everyone’s minds were blown away with the heart touching singing and as the judge put it himself, the abilities on display in Retake were Bollywood level.

From creative chants and slogans to teaming up, and supporting other contingents during the events, no stone was left unturned with the contingents efforts in PR. Finally Retake 2021 was closed off with the closing ceremony where everybody awaited the result and the deserving victors with their sincere efforts took home the prizes with glee. At the end Flying Beast won the distinction of being the best contingent, while the best PR was swiped up by BB ki Vines. Everybody jammed to songs with happy faces and heavy hearts as Retake 2021 came to an end, it was a journey of hard work and great spirit!