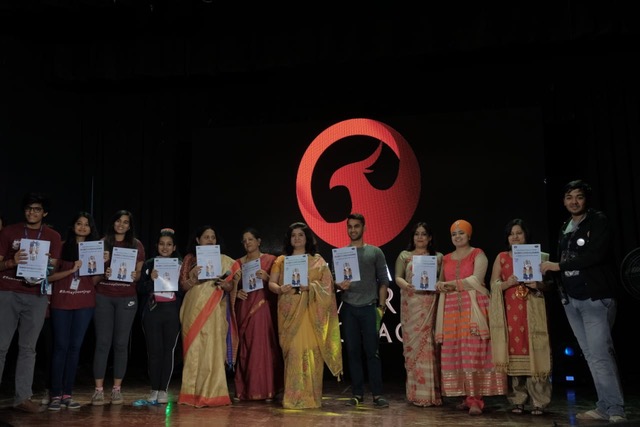 Kishinchand Chellaram College witnessed its 25th annual BMM Festival Kiran-Blitzkrieg’18 on 25th September’18, and involved the largest yet participation in a BMM Festival, with over 30 colleges involved bringing over 3000 people and 50 colleges.

With “Personagia” as a theme, various Bollywood and Hollywood Sidekicks such as Malik Kafur im a traditional Indian attire, Majnu Bhai in his brown leather jacket, Kattapa in his full armour, Katekar from Sacred Games and Sambha with his Basanti were seen roaming around campus with full vigour celebrating their contingent and putting the best foot forward around the theme #TheRealHeroNotFound. The theme aimed to keep the sidekicks that make a hero a HERO, alive, making the sidekicks the REAL HERO. An ode to the ones who made sure the hymns of the heroes of our favourite stories did not go unsung. Right from Mr. India’s calendar to Bahubhali’s Kattapa and Light Yagami’s Ryuk to Batsman’s Robin, you name it and they shall have your back.

K.C. College’s Principal Dr. Hemlata Bagla said, “The real hero is the one who makes the hero a hero and irrespective of who wins, every single person here is a hero for putting up a fantastic show.” Head of Department Mrs. Manjula Srinivas added, “Kiran Blitzkrieg 2018 was a grand spectacle and is one of the biggest BMM festivals. It is heartwarming to see colleges put their heart and soul into this and this just goes to show that there is extreme potential in today’s youth if they set their mind to it.”

The day was filled with Media events surrounding dramatics, Literary and Design Skills, Fashion, Advertising, Modern Journalism and Filmmaking, Dance and Drama, bringing forth various Taboos and societal issues through their performances, in a critical yet satirical manner. One of the most loved Contingent, Malik Kafur delighted everyone by their LGBTQ+ representation and love after the recent decriminalization of Section 377, shown through vibrant placards, posters with the LGBT Flag, Headbands, Rainbow streamers and moving advertisements, and subtle yet remarkable PR Skills. The day started with a bang, with Chariots drawn on Dinshaw Wachha road, and students entering gloriously with their enthusiasm on board for the entire day, starting with a classical Puneri Dhol and the unveiling of the theme done by the college Principal, Dr. Hemlata Bagla along with the HSNC Board members addressing the national and international crowd. The day was filled with Media events such as “Oh shoot!”, “The Ultimate Crossover”, “A Twist in a Tale”, “Blitzagram Live” and “Mocking Jay-Z” which tested Photography, Literary and Design Skills, Fashion, Advertising, Singing, Modern Journalism and Filmmaking, Dance and Drama, bringing forth various Taboos and societal issues through their performances, in a critical yet satirical manner.

The students were graced by the presence of renowned personalities from the Media Industry such as Vaibhav Ghuge, Rohit Bhatnagar, RJ Prerna Nahata, Sheen Dass and Rohit Mehra. ‘‘Being someone who has been a part of the film industry since the age of four’ said Pooja Ruparel, the well-known actor from Dilwale Dulhania Le Jayenge, ‘There are no shortcuts to anything and nothing beyond the basics. How you live life, every moment, is very important. “Tum nahi keh sakte ki 10 saal hai, bohot din hai,NO, figure it out now”.

The day came to an end with its closing ceremony, and lots of memories to nourish throughout every student’s life. The closing ceremony graced the presence of all the beloved teaching and the non-teaching staff of BMM faculty and the chief guest Mr. Karan Sharma.