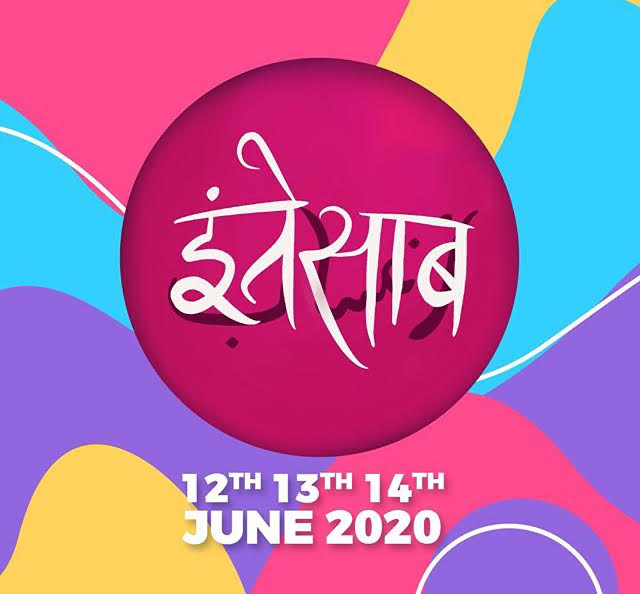 Intesaab 2020, organised by the Ishan Foundation Trust, Jaipur x Mumbai, marks a new beginning where art and artists find their way to express their inhibitions. Scheduled on the 12th, 13th, and 14th of June 2020, it was India’s first virtual festival. Intesaab believes in making a change in society that sustains us. Thus with the purpose of raising funds for the COVID-19 pandemic, Intesaab 2020 was able to raise around Rs. 60,000 which will be donated to NGOs like Prerana, Saarthi, and Kineer services

The First Panel on “Is Law an excuse for Morality?” questioned the role of law in society, its values and its structures. This session considered how the lives of people are defined by the state and it’s practices and thus concluded, by taking into account the importance of law in deciding societal morals.

This event was followed by another informative panel “Roots of Feminism” This session primarily aimed at clearing the confusion on the true meaning of feminism. As Deepa Narayan, an author and former advisor at World Bank remarked “women can’t stay modest, they have to assert their dominance and make their presence felt to move forward”

Our panel on “Legal Trans Oppression” discussed how discrimination, chauvinism, bias and bigotry taint the society today. It raised the issue of why are transgenders considered to be an abomination to the society and by extension, law. Dr Preeti, Researcher at MHRD, added  “We are waiting for and working towards the day when we will not have to raise our voice, demanding dignity”

This panel was followed by the rejuvenating performance by Nush Lewis, who opened to a packed house and appreciated the organising committee.

To conclude the festival director, Suryansh Deo Srivastava said, We had our doubts about the virtual format. The pressure to replicate a physical festival experience was immense. However, the first day only strengthened our conviction and we can’t wait to see how the other two turn out.

Day 2 was yet another day of people with revolutionary mindsets conveying their message and their mindsets to college students and an older audience from all over the country.

Kavita Krishnan, a communist feminist activist, highlighted ‘Psychological or emotional abuse is almost never reported, as this is normalized by the maternal family and the in-laws, conditioning the women to accept her fate at the cost of her self-respect’

Manoj Joshi, a Distinguished Fellow at the Observer Research Foundation, pointed out how the current pandemic has brought the need for change is geo-political spectrum to light and the inability of the G-20 countries to reach to a consensus due to US-China rivalry

Priya Goswami, an independent filmmaker and activist from the international organisation, Sahiyo, delivered a keynote about Female Genital Cutting and encouraged the attendees to take matters in their own hands and work towards a cause they truly believe in.

It began with Surat based notable activist, Abid Surti and Founder of Saarthi foundation, Kriti Bharti who discussed what the future of activism would look like.

We then had Laxmi Narayan Tripathi of Kineer services share her views on how transphobia is a battle which the kinnar community fights daily.

City based comedian, Raunaq Rajani performed and interacted with the audience. “I am glad this could be a safe space for people to share”, said Rajani after the crowd work touched upon sensitive issues.

While storytelling collective jashn e qalam performed a beautiful piece by Kamleshwar, the highlight of the evening was the splendid conversation with Prof. Salima Hashmi, the daughter of the revolutionary poet Faiz Ahmed Faiz.

Mrs. Hashmi, now 78, shared with the audience her memories with her father, whose poem the fest was named after. She reiterated the values put forward by his poems and recited some of them to the virtual gathering.

On being asked how the partition impacted Faiz’s poetry, she said that while he had seen it coming, he had never imagined it would be this bloody, this gory, and this heartbreaking. She told the interviewer that Faiz can never belong to any country; he belongs to everyone who is against totalitarianism and despotic leaders.

The intercollegiate side of the festival saw the esteemed St. Xavier’s College emerging as the champions. With NMIMS ASMOC and SCMC, Pune as the 1st and 2nd runners-up.

This entirely student-led festival saw a virtual footfall of over a thousand attendees and established itself as the pioneer in the domain of online cultural festivals. Thus, Intesaab 2020 was a cradle for new avenues to emanate, reorient, and unravel incredible directions that will divulge our past, mold our present, and inspire our future.