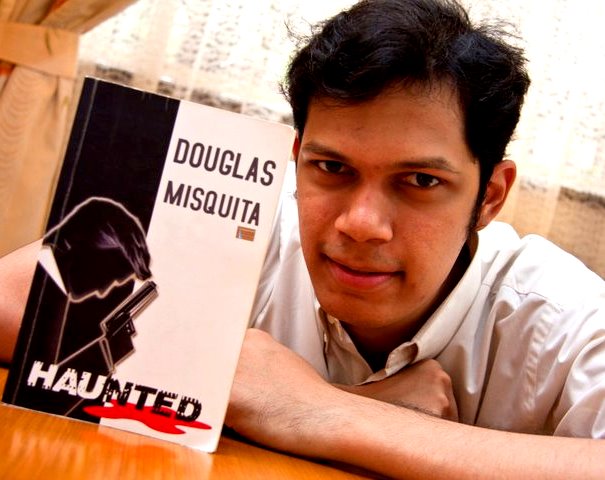 Author of Secret of the Scribe, Douglas Misquita is an engineer by day and a writer and musician by night.

You dedicated Secret of the Scribe to your Father. What influence has he had on you over the years?

With reference to the book dedication, my dad would take me to the movies right from when I was little. At an impressionable age, I learnt what it felt to be fascinated and drawn into another world for two hours or so… and that has a great influence on how I wish to enthrall readers through my books. Outside of the book over the years, my dad has always been humble and good to people.

You mentioned that the idea for this book came about during an online conversation with your professor Swarada Kirloskar. What unfolded in that conversation?

We were talking about the proliferation of computing devices in the short span of time since our class graduated in 2002. At one point, one of us (I can’t remember who) said that soon people will only need to know how to sign their names; everything else will be computer fonts. And I had an idea right then and there…

What inspired you to write Secret of the Scribe?

The proliferation of communication technology and devices, the ease at which they are available to us and the velocity with which they are integrated into our lives. I thought to myself, what if a technology giant invented something so fantastic that it was bought by almost everyone, and then that technology was used to insidiously control people. It’s evident in how much data our mobiles collect about us. I also wanted to include an angle on what we sacrifice when we adopt technological substitutes and I tied in my conversation with Kirloskar at that point: we stood to lose all the beautiful language scripts in the world and the need to learn to write.

What kind of research did you do to ensure historical and scientific accuracy?

The internet has made research easier – but one must be careful of misinformation. I researched Egyptian mythology from various sites, based my locations and geography on Google Earth maps, and used real-life experiences and archeological sites from my visit to Egypt for most of the third part of the book.

I found references to the Dropa Discs on conspiracy theory websites and interestingly found that the time period matched the US and Russian investment in Egypt for the Aswan Dam. I was excited I could use that to my advantage. It’s also true that the US suddenly lost interest in the Dam.

Connectomes – maps of the brain’s neural pathways really exist and Nat Geo ran an article on it. The science of how linguistics’ communication headbands work was fiction at the time, but I’m very excited to hear reports just this September that a team transmitted a single word from India to France via a brain-computer-interface headband and the internet. It won’t be long before brain-to-brain communication is a reality. You won’t need to speak.

All the weapons and vehicles are real and exist.

Did you suffer writer’s block while writing the book? How did you deal with it?

Yes, I did; I was incapable of even simple tasks that day. I dealt with it by just taking a one-day break from writing. After that everything flowed smoothly

Were there any challenges in getting Secret of the Scribe published?

The only challenge we faced was the length of the draft. We contemplated releasing the story in two volumes but that wouldn’t work because the book wasn’t written to be two volumes. In the end I solved that issue by being very brutal in my revision and edits.

After the book was published what was the biggest compliment and criticism you received?

A compliment that said,  “This book is difficult to put down, so I would recommend reading it over the weekend. It has a gripping storyline combined with a fast pace. I look forward to reading more of Douglas’ works in the future.”

And a criticism that read, “Why is he willing to settle for something that will be at best a mediocre story rather than use his talent and skill to narrate a tale that will be interesting.”

If Secret of the Scribe is turned into a film which actors would you cast in which role?

How did your interest in writing originate?

I read Michael Crichton’s Jurassic Park in 1993 and was so impressed by the narrative that I just had to emulate him. I handwrote a 100-page adventure to satisfy that urge.I think that right there was my beginning.

If you could choose one author as a mentor, who would it be?

Do you have any strange writing habits?

If you could have written any book in history, which book would you choose?

Are there any similarities between you and your protagonist? If yes, what are they?

Lance Michener, like me, is concerned about how we use all the communication technology available to us and how globalisation may result in the demise of cultural and traditional peculiarities.

Is there a theme or an idea that you would like to work with in the future?

I generally don’t like to reveal what I’m working on until it’s in a final product.

Do you have any advice for aspiring authors?

Write what you enjoy; don’t be an author of a genre you aren’t at ease with. Write whenever you have an idea, you can string them together later on.