5 student from Chennai bag an award in international robotics competition Students of Bharath University, Chennai were recently awarded the ‘Third Place – in Service Delivery League’ at the AUTCUP 2013 held by Amirkabir University of Technology in Tehran, Iran. The robotics competition brought together more than 100 teams to compete between 29th October and 1st November 2013. The team of 5 students from Bharath University were the only Indian team selected to compete in the finals and bagged the award by displaying their brilliant humanoid and rescue robots in the Humanoid League, Rescue League and Service Delivery League of the competition

The Robotics Team of Bharath University is all set to collaborate with top universities and research labs across Europe, Australia and New Zealand to work on research related to multi-terrain vehicle and humanoid robot projects. The university’s Robotic Centre of Excellence is working on developing companion robots to assist elderly people and autistic children. The robots in question will have multiple human-robot interaction abilities and are aimed to be ready for market release by 2016. 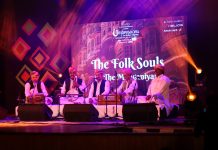