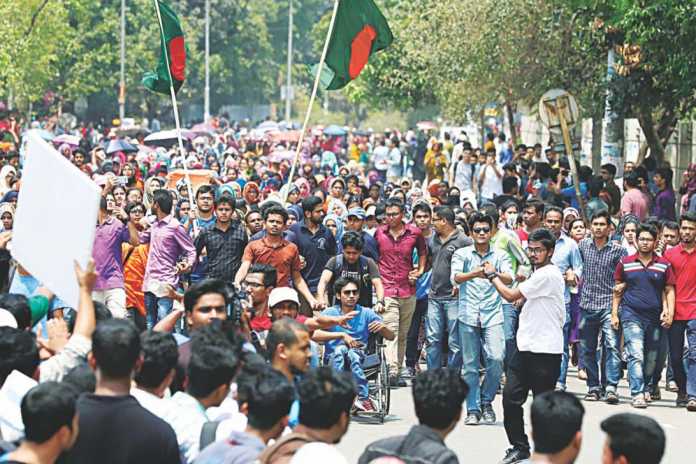 Students in Bangladesh took to the streets and violently protested against the quota system for government jobs. They claim the system is faulty and biased, and everyone should be treated equally.

According to reports, 56% of government jobs were retained for people falling within quotas. Of the 56%, 30% was reserved for descendants of freedom fighters, while the other 26% compromised of quotas for ethnic minority groups and women.

Seats under the quota which remained empty were not offered to students from merit list, sparking outrage. The protest began in Dhaka, the capital of Bangladesh, and their protest carried on for a month. They got organized and attracted more support. The protest disrupted traffic in Dhaka, as hundreds of students showed up in support of the cause. As the protest escalated, students from metropolitan cities like Chittagong, Khulna, Rajshahi and Barisalalso joined. Classes were boycotted, as thousands marched in unity, demanding the abolishment of the quota system.

The police were forced to get involved, to prevent the capital city from shutting down. Using tear gas and rubber bullets, the police clashed with the unarmed protesters, leaving 100 injured.

Students who do not come under the quota found it difficult to get jobs and placements due to the quota, which occupies more than half of the seats. The government has received sharp criticism for failing to change the system, which leaves thousands of those on the merit list without jobs, and a thousand seats not filled under quota left empty.

The government was under scrutiny and was finally pressurized to bring about a reform.

Bangladesh Prime Minister Sheikh Hasina broke her silence on the matter saying,” The quota system will be abolished as students do not want it. They have demonstrated enough protests. Now, let them return home”.

The students hoped their movement brings about a lasting change, and that jobs are distributed based on merit, and not caste, creed or gender.