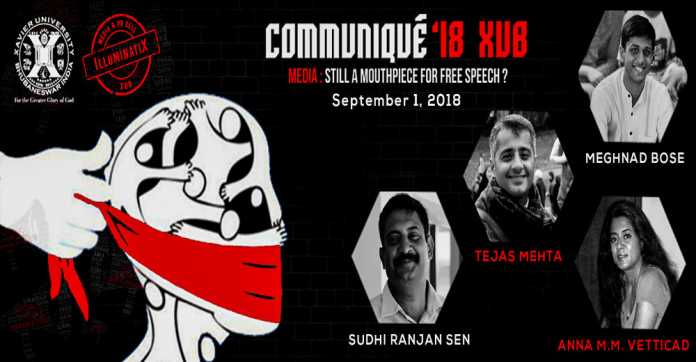 IlluminatiX – the Media and PR Cell of Xavier University, Bhubaneswar will be hosting its annual Media Conclave – Communiqué’18 XUB. The conclave aims to touch upon the theme of Media: Still a Mouthpiece for Free Speech?

A free press gives a practical effect to the individual’s right to free speech. It allows one’s voice to be heard by many. In a democracy like ours, media is a factual necessity. Free Speech and Media sail together to set things on track. For all its fundamental importance, however, free speech is constrained on occasions when it collides with other values and factors such as Media Violence and Political Biasness of Media Houses. Thus, to ponder over the issues pertaining to Media and Free Speech, Xavier University, Bhubaneswar, brings to you Communiqué’18 XUB.

XUB believes in providing a platform for premium discussions on pressing issues and trends. It organizes a plethora of top-notch business conclaves to fortify and hone the skills of its students. Communiqué’18 XUB is one such conclave which intends to deliver an enriching and interactive session with respect to the Media and its role in providing a medium for Free Speech.