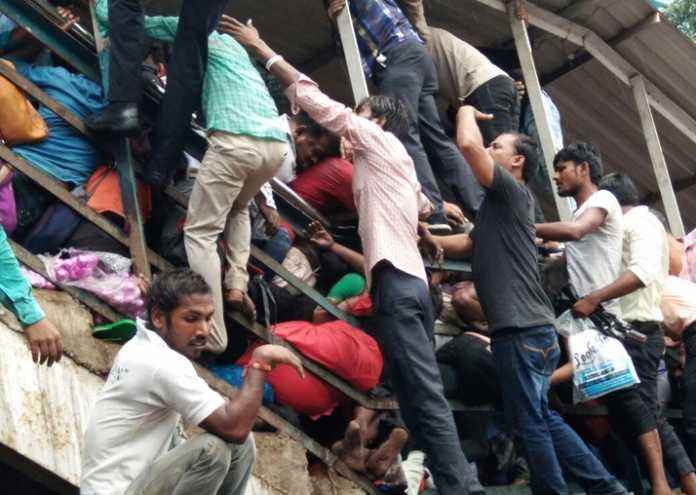 A budding CA who had a bright future ahead of her, a mother of an 8-month old baby, an 11 year old who was yet to chase his dreams, two best friends going festival shopping – these are some of the 23 innocent lives that were lost during the September 29th Elphinstone Road Station Stampede. As for those who survived? The image of dead bodies keep haunting some, one can’t stop thinking about a relative’s cry for help, and others need sleeping pills to get a goodnight’s sleep.

It’s been a week since the horrific incident. An official probe into the incident has ‘revealed’ two main causes for the stampede – one is the sudden downpour that compelled people to take shelter on the footover bridge, and second is the constant influx of commuters alighting from trains that probably made the situation worse. The investigation also revealed that when GRP officials reached the site, the damage had already been done. Officials also say that there was no dereliction of duty from any railway or police authority present. Does this give the government a clean bill in the investigation? Citizens beg to differ.

A number of social media posts by angry citizens reveal their disappointment with the system, and thousands of petitions have fallen on deaf ears. But even if the government is not responsible for what happened, how would one explain how a country with the richest civic body cannot afford basic facilities for its citizens? Where are the crores of taxpayer money going?

The day of the incident brought on a blame game between political parties, each accusing the other about the apathy towards the city’s crumbling railway infrastructure. Citizens have reprimanded the government for their lack of responsiveness towards complaints about the bridge. And according to an article in Scroll, the complaints started four years ago via hundreds of Tweets. In an eerie coincidence, a user’s Tweet even said that the Elphinstone stampede was ‘a disaster waiting to happen’.

The city and country in general are divided in opinion about whose fault the tragedy is. While some spokespeople for political parties have been vocal about how the government has nothing to do with what happened, and heavy rains and overcrowding of people are to blame. An article in Firstpost says that a spokesperson for the BJP youth wing went on to say that people should also take responsibility (which brought with it a lot of backlash from netizens).

The existence of a single FOB in one of Mumbai’s commercial hubs surely has a part to play. 80% of our city relies on the railway system to get them to work. These are people that leave their families for a good eight hours, and whose families await their return every single day. Many of them are breadwinners for their families, and they deserved better that to push and shove their way to work.

While it is still unclear who is to blame for this, we could’ve definitely done with a proper railway infrastructure. No matter how much we’re told that the city is prepared for even the heaviest of downpours, the floods on July 26 and August 29 prove otherwise. And isn’t it normal for people in their festive finery to take shelter from a sudden shower? We can only hope that the authorities adopt safety measure to avert such disasters in the future, and that we’re provided with better basic infrastructure for us to make it to work or college alive.