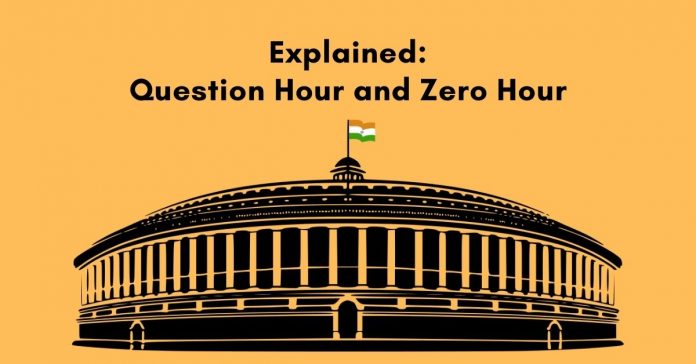 Parliament, which is also called as a ‘Temple of democracy’ is currently at the centre of debate because of recent developments amidst of ongoing pandemic of Covid-19. A decision taken by the central government of quashing question hour and curtailing zero hour in the upcoming monsoon session, attracted severe criticism from opposition parties and other civil society pressure groups.

The president from time to time summons each House of Parliament to meet. But, the maximum gap between two sessions of Parliament cannot be more than six months. In other words, the Parliament should meet at least twice a year.

There are usually three sessions in a year, viz,

Monsoon session of parliament is scheduled to be held from 14th September to 1st October this year. Usually, monsoon session is held in the month of June, but due to unprecedented havoc wreaked by Covid-19 pandemic compelled to postpone it by three months.

Question hour and Zero hour are important devices of parliamentary proceedings by which executives are held responsible for their obligations towards Indian voters and impact of policies on present and future is debated, discussed and deliberated. Let’s have a closer insight of Question hour and Zero hour and how both these devices are crucial for vibrant functioning of parliamentary democracy.

According to Lok Sabha website Question hour is meant ‘to sense pulse of the nation’. It is slotted as first hour of each working day where the members ask questions and the ministers duty bound to give answers. Here the parliamentarians hold Government accountable for their actions. During this period government put on to trial for the act of omission or commission while acting under official duty.

During Question hour, questions can be any of four kinds mentioned in rules of procedure.

The list of starred, unstarred, short notice questions and questions to private members are printed in green, white, light pink and yellow colour, respectively, to distinguish them from one another.

Unlike the question hour, the Zero Hour is not mentioned in the Rules of Procedure. It is an Indian innovation in the field of parliamentary procedures and has been in existence since 1962. Thus, it is an informal device available to the members of the Parliament to raise matters without any prior notice.

Zero hour, which usually starts at 12 noon (it is another rationale to call it Zero Hour in parliamentary parlance), whereby MPs can raise their questions about issues of urgent public importance.

For raising matter in Zero Hour, concerned MP must give a notice before 10 AM to speaker (in case of Lok Sabha) or Chairman (in case of Rajya Sabha) on the day of raising issue. Presiding officer may decide to grant on merit at own discretion based on merit and importance of the issue.

Current controversy erupted when Rajya Sabha and Lok Sabha secretariat issued notifications about suspension of question hour and curtailing zero hour. In justification, this notification also stated that this has been done in order to prevent crowding and thus ensuring health of parliamentarians from Covid-19 epidemic.

Congress party leader Adhir Ranjan Chowdhury criticised this move and requested to refrain from this decision. AIMIM leader Asaduddin Owaisi criticised it by saying it is “against the constitution”. Trinamool Congress MP Derek O’Brien said, “Pandemic an excuse to murder democracy” in his tweet.

Four time in the past, Question Hour dispensed with owing to wars (in 1962 and 1971) and during emergency (in 1975 and 1976). This will be fifth occasion when such extraordinary trajectory being followed.

This year, people across the globe facing worst ever healthcare crisis and India is not immune to it. So, it is moral duty of Indian parliamentarians to solve such procedural discords amicably and ensure good healthcare for people of India by constructive debate and deliberations during this session. Co-operation and co-ordination of ruling party with opposition would have constructive impact on dwindling morale of populace in this challenging time.